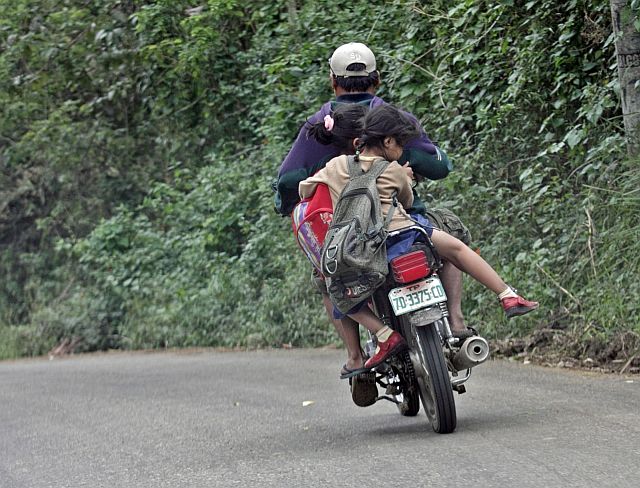 A Cebu City government official is suggesting allotting a period of time allowing parents or those fetching their children using motorcycles to and from schools, a suggestion presented especially with the implementation of the Children’s Safety on Motorcycle Act, which bans children from riding motorcycles.
CDN FILE PHOTO

Cebu City officials are scrambling for ways to implement the new law prohibiting small children from riding motorcycles and at the same time make sure that it does not become a problem for those who use motorcycles to bring their children to school.

Councilor Joy Augustus Young, deputy mayor on education, suggested that law enforcement agencies allot a certain period of time during a school day to allow those bringing or fetching their children to and from their school to ride the motorcycle.

Fully aware that the opening of classes for public elementary schools is just two weeks away, Young said he will have to meet with other agencies concerned to discuss the implementation of Republic Act No. 10666 or the Children’s Safety on Motorcycles Act of 2015.

Among those he would meet are the Department of Education (DepEd), Association of Barangay Councils (ABC), Cebu City Police Office (CCPO) and the Cebu City Transportation Office (CCTO).

“We have to give consideration. We understand the objective of the law which is on safety. But what if they are safe but cannot go to school? We have to stretch the law to the point that it is still not illegal,” he told reporters yesterday.

Young said he will bring up his suggestion during the meeting.

He said that authorities should still allow motorcycle riders with small children to pass through busy thoroughfares during the start of classes (6 a.m. to 8 a.m.), end of day classes (3 p.m. to 5 p.m.) and end of night classes (9 p.m. to 10 p.m.).

Under the new law, small children are not allowed to ride motorcycles if these pass through public roads with heavy volume of vehicles, a high density of fast-moving vehicles, and those where there is an imposed speed limit of more than 60 kilometers per hour.

Young said this would mean that schoolchildren in the city’s mountain barangays, where there are no modes of public transportation, should also be exempted from the prohibition since the roads in the mountain areas do not have heavy vehicle traffic.

Young said the problem is in the city’s urban barangays since motorcycles will have to drive along or across national highways which are full of vehicles and are part of the new law’s prohibitions.

While he said the city has no choice but to implement RA 10666, Young also lamented that the new law is “anti-poor.”

“I think I understand the intention of the author. But I also think that this is an anti-poor law. They did not consider the people who use only motorcycles,” he said.

“We are not saying that the poor people should be subjected to danger. But it’s a reality,” he added.

Drivers caught for the third time face a one-month suspension of their license. Any more violations would result in the cancellation and revocation of their license by the Land Transportation Office (LTO) which has been mandated to enforce the law.

Read Next
Cebu province named most disaster-prepared LGU in CV