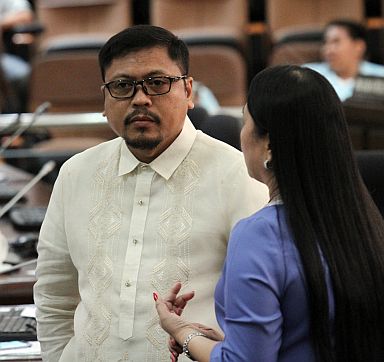 Association of Barangay Councils (ABC) president and Tisa barangay captain Philip Zafra is concerned that the PUJ traffic rerouting scheme, which starts with a dry-run today, will only worsen congestion problems in south barangay roads that are currently being used as “shortcuts” to get to the city. /CDN FILE PHOTO

Association of Barangay Councils (ABC) president and Tisa barangay captain Philip Zafra is concerned over expected traffic congestion forming in many south barangays which will serve as alternative routes for commuters who wish to avoid traffic along N. Bacalso Avenue.

“We have reservations on the traffic scheme that’s why we will just observe how the dry run will go and what will be the results. We have to look at the inconvenience it will cause on the people. I don’t know if this will sit well with the people affected,” said Zafra who also sits as ex-officio member of the Cebu City Council.

Starting today, the Cebu City Transportation Office (CCTO) and the Department of Public Works and Highways in Central Visayas (DPWH-7) will hold a dry run on the rerouting scheme for public utility jeepneys (PUJs) to give way to the construction of a P683-million underpass project at the intersection of N. Bacalso Ave. and F. Llamas St.

Zafra noted that in Barangay Tisa for example, roads especially Katipunan St. already suffer from congestion even without the rerouting as many south residents have gotten accustomed to using inner streets in the barangays to avoid the volume of vehicles passing through the highway.

Under the approved PUJ rerouting scheme, more jeepneys will be made to pass Katipunan St. instead of N. Bacalso Ave. as a portion of its southbound lanes, front of McDonald’s, will be closed during the first phase of the project which is expected to last between three to four months.

Though not part of the rerouting plan, private vehicles are also expected to use the roads in Tisa and other barangays, as alternatives to get to the city proper.

“That will really aggravate the situation. We will just observe what will happen if this scheme is really feasible,” said Zafra, adding that DPWH and CCTO should present their plans to the City Council to officially inform its members.

Zafra said that while barangay tanods will be deployed to help manage traffic in barangay streets, DPWH-7 must clear national roads and sidewalks, within the route, from obstructions like vendors.

He added that DPWH and CCTO should conduct more consultations to discuss results of the dry run to give room for possible revisions of the traffic plan, should there be any.

For his part, Bulacao barangay captain Rodrigo Jabellana also prepared to deploy traffic aides to help manage traffic in the village during the two-day dry run.

Jabellana said that although Bulacao is not among the eight barangays included in the rerouting scheme, traffic congestion may still reach the village, which sits right next to Barangay Pardo.

“We may be affected for now, but if this will be finished, this will also be beneficial. Let’s just sacrifice a little,” Jabellana said.

“I believe that DPWH really studied this project as we have transportation engineering,” the Bulacao village chief added.

Construction of the entire project is expected to last at least a year and six months.

Based on the final design, the project will be 700 meters long; but the actual underpass will only be 620 meters with a vertical clearance of 5.2 meters.

Upon completion, the depressed portion of the underpass will have two lanes – one going south and the other north to accommodate vehicles from Cebu City to the south and vice versa while passing straight through N. Bacalso Ave.

Each side of the underpass will also have two-lane streets for vehicles turning to and from F. Llamas St.

Depending on the results of the dry run, DPWH said they may already ask the project contractor to start mobilizing equipment by next week.