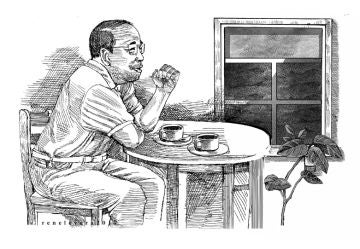 July I have often ignored, and so far I have not written about. It is almost an anonymous month, a nondescript bridge to an August remembered only because of the flash floods.

At noontime I repaired to a coffee shop and found it full, but after a short wait got myself a table with a chair still warm and therefore with healing properties depending on who the previous occupant was. To my right, next to the glass wall, were a noisy couple, who laughed and spoke at the same time, but obviously still made sense to each other, because they were still friends when they left, still noisy, still laughing and speaking at the same time. I noticed that their being preoccupied with nothing but synchronous speech and laughter was just an illusion, because nothing was left of the pork chop on their plates, except the rind.

The sky was overcast, of gun-metal gray. So far my words had forked no lightning — as Dylan Thomas put it. Could I command fire to come down from heaven? As James and John wanted when the advance party that Jesus sent into a Samaritan village returned with the news that the people there would not receive the master, for the reason that he was heading towards Jerusalem, which was adversary country? “Lord, do you want us to bid fire come down from heaven and consume them?” the hare-brained brothers asked Jesus, who rebuked them for their rashness. And they went on to another village, Luke writes.

At this point, a van stopped outside. When I peered, I saw my sisters and their families packed within with their luggage and supplies, off to spend time in the old town. As they were passing by, they saw me in the coffee shop, now typing on my Mac, now sipping the Americano. I stepped outside and talked to them and tactfully refused, giving work as reason, when they invited me to join their group.

In fact, the wife and I had done some traveling in June, to the same spot by the sea where my sisters were headed for, which at tide out gives on to a series of undulating sandbars and the odd egret. What does this mean, this journeying to whatever place — sea, mountain, town? It seems to me that a voice within us, that what we find about us, that Being itself speaks, “Come.”

Which was what Jesus said to those he met on the road, “Come.” As well as to us. Come, follow me. But we refuse. Because we love our lives more. And, as Matthew puts it, “[W]hoever finds his life will lose it, and whoever loses his life for my sake will find it.”

To be worthy — of the kingdom of God. But all I cared for was to be physically worthy. I did a mile of walking most mornings and lifted small weights.

If living causes emphysema and closes the mind, I hope I was breathing more easily after the workout, and brooding with a broader brain.

Then it rained heavily and in no time the street sank under an inch of water. I thought I heard thunder. An aged couple walked by under a red umbrella, equally old. As they walked slowly arm in arm, I told myself, “There is no question of one not following the other, and of them walking abreast — not when it rains in July.”

Read Next
Knock on wood