CV cops urged: Step up in war vs. drugs 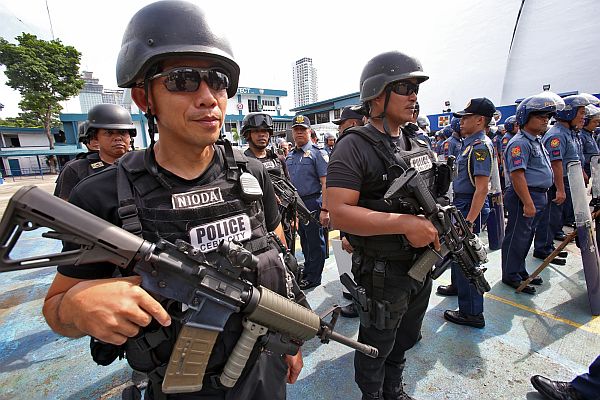 POLICE officers in Central Visayas are encouraged to step up in their campaign against illegal drugs.

This is the call of the Chief Supt. Jose Mario Espino, the new Police Regional Office in Central Visayas (PRO-7) director, who took over as the region’s top police officer on Monday.

Espino made the call to Central Visayas police officers, as he considered the fight against illegal drugs as a challenge especially after President Rodrigo Duterte identified Cebu as a hotspot for illegal drugs.

“It is now a challenge for me kasi (because) just a week before I assumed (as the regional director in Central Visayas), our Cebu Province considered a hotspot on drugs,” Espino said.

However, he also described the performance of the region’s police officers in terms of anti-illegal drug operations as exceptional.

But Espino said with this performance, they should sustain and intensify their campaign against illegal drugs.

“Sabi ko nga ang PRO-7 when it come to accomplishment sa illegal drugs (campaign) hindi umaalis yung Central Visayas sa 1, 2, or 3 sa rankings sa Camp Crame. Pero hihigitan pa natin ito (Like I’ve said when it comes to accomplishments in the illegal drugs campaign, the PRO-7 remains at 1, 2 or 3 in the rankings. But we will surpass this),” he said.

A day before Espino issued his call to the region’s police officers, the police from the Cebu Provincial Police Office, Moalboal town and Badian police officers, conducted separate operations, which led to the arrest of 7 persons including three high value targets.

While a few hours later, a separate drug operation also led to the arrest of Renato Apostol, 34, and Jeremy Balbuena, 23, of Barangay Manduyong town in Badian, Cebu; Roel Vincent Harap, 29 of Barangay Poblacion; and Jose Julie Eyac, 18, of Barangay Saragosa.

Yape said that the suspects were detained at the Moalboal and Badian police stations pending the filing of charges.