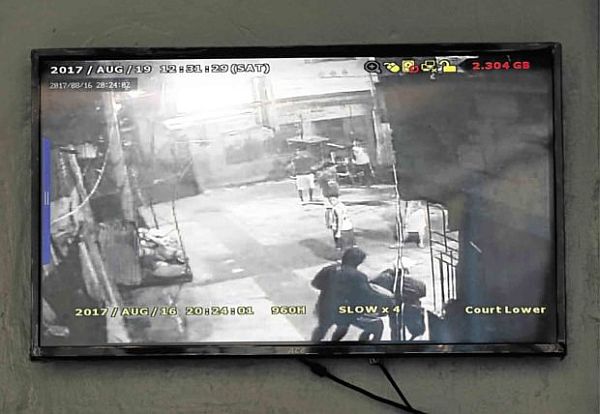 CCTV frame shows Kian delos Santos, his head covered with a shirt, being dragged off by two persons past a basketball court.

ILOILO CITY — Senator Franklin Drilon on Friday reiterated his call for the Ombudsman to conduct the investigation into the killing of Kian Loyd delos Santos instead of the Department of Justice (DOJ).

“It is obvious that (Secretary of Justice Vitaliano Aguirre) is biased. From the totality of his statements, he tends to protect the policemen rather than project impartiality,” Drilon told reporters here, referring to Aguirre’s testimony on Thursday at a hearing of the Senate committee on public order and dangerous drugs.

“After the hearing, we cannot expect the DOJ to remain impartial. That is why in the name of justice, Aguirre should let the Ombudsman conduct the preliminary investigation,” Drilon said later in a statement.

“For obvious reasons, Aguirre declined, and wants to control the preliminary investigation,” the senator said.

Policemen under the Caloocan City police are being investigated for the killing of the 17-year-old boy which the police claimed to be a shootout during a drug raid.

The killing has been met with widespread anger and criticism after security camera footage and witnesses supposedly showed that Delos Santos was arrested, beaten and summary killed by policemen.

Drilon criticized Aguirre for refusing to allow the Ombudsman to conduct the investigation.

“He said no because he was more concerned with the image with DOJ (rather) than the image that the rule of law is the primary consideration in this investigation,” the senator told reporters.

He cited the statements of Caloocan City prosecutor Darwin Cañete which he said showed partiality for the policemen.

“You cannot help but conclude that the scale of the justice system is tilted in favor of the policemen rather than being neutral and impartial and (to) seek the truth,” Drilon said.

Asked to comment on criticisms that the opposition Liberal Party, to which he belongs, is capitalizing on the issue, Drilon said: “Let the public judge.”

Drilon pointed out that the condemnation on what had happened to Delos Santos has been “universal” which no single group could influence.

He said the condemnation was also because of the details coming out that Delos Santos was defenseless and he was killed on flimsy grounds.

He cited the testimony of the policemen in the Senate hearing that they only found a witness who alleged that Delos Santos was a drug courier a day after he was killed.

One of the policemen had said in the hearing they also got information against Delos Santos from social media.

“But even if (Delos Santos) was involved in illegal drugs activity, is it correct to just shoot him? Tama ba ’yon (Is that right)?” Drilon said in the press conference.