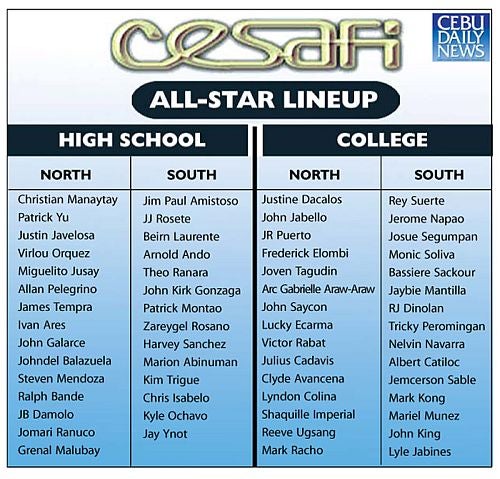 Coaches, players say stats should have been basis in choosing lineup for Cesafi All-Star squads

The roster of participants for this weekend’s Cesafi All-Star Games was released and met with criticism after several players who had tallied superior numbers to those in the list were snubbed from the annual game.

Even with complete statistical coverage of the collegiate division provided by SIA Sports Cebu and Common Ground Basketball, several players, whom coaches and players alike thought worthy of a spot, were nowhere to be found on the list that was given to the media by Deputy Commissioner Danny Duran.

Asked what the criteria for players were for them to make it to the prestigious game, Deputy Commissioner Marven Panares said that they just chose five players per team, especially for the South All Stars, which was composed of cagers from the University of the Visayas (UV), the University of San Jose-Recoletos (USJ-R) and Cebu Institute of Technology-University (CIT-U).

Repeated queries to deputy commissioners as to whether or not statistics were utilized went unreturned as of this writing.

Players and coaches chimed in, saying that statistics and performance should have been the sole basis for a player’s selection to the all-star teams.

“They should have based in on statistics,” said Southwestern University (SWU)-Phinma head coach Mike Reyes. “But if we have to accommodate all the teams, dapat two players lang with the best stats.”

SWU-Phinma assistant coach Jerry Abuyabor also echoed the sentiments of his head coach, saying things would have been better off had the selection process been based on indisputable figures.

The players also had their say.

Tristan Albina, the University of the Visayas’ standout two-guard who averages 10.3 points, two rebounds, an assist and a steal per game, shared his frustrations upon learning that he didn’t make the team for the second straight year.

“I’m definitely going to take it personal. I said I’d be pissed off about it, and I am. But I have to move on because I know that it won’t change a thing.

I’m comforted by the fact that people know my worth on the court compared to some of the players who were selected,” said the recruit from Dumaguete.

Sheldon Gahi, a teammate of Albina whose numbers have stood out this season but is also not included, emphasized that those who deserved spots should have been recognized.

“They really must follow the stats. It’s not good if they would just choose five players per team. Those that deserved spots should have made it since their numbers really don’t lie. What’s the purpose of gathering statistics if they won’t use it?” said the spunky point guard.

“I’m not saying that I should have made it. Championships are more important to me than individual accolades. But I don’t agree with how they picked the all stars. There were a lot of deserving players that didn’t make it,” he added.

Steven Bucao, a veteran guard for CIT-U, also expressed his disappointment. “We’re just really disappointed since this is our senior year and then this happened?”

Curiously, two rookies from the Wildcats — Lyle Jabines and John King — were selected.

“I believe we have teams that have rosters with more deserving players compared to other teams. It’s possible that the not-so-strong teams can just have less than five players on the all-star team. We can have maybe just two or three so that it could open up slots for other players,” said Alcaraz.

Read Next
No grand slam for SMB