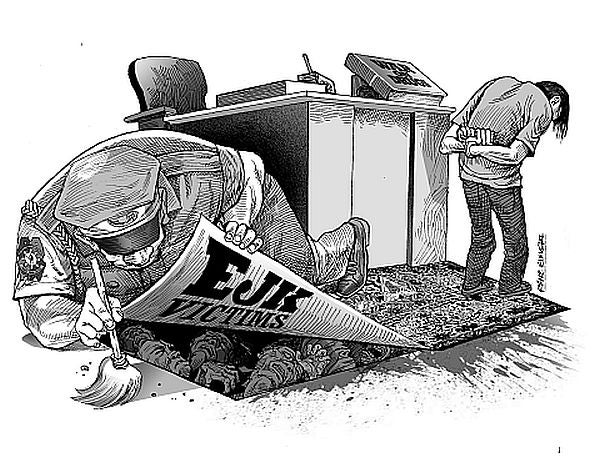 The Duterte administration’s defense of the PNP’s assertion of not “one,” but zero recorded extrajudicial killing (EJK) ever since President Rodrigo Duterte assumed office in July last year was typical “palusot (alibi)” since it found the perfect excuse in Administrative Order No. 35 issued in 2012.

The administrative order defined EJKs as killings where “the victim was a member of, or affiliated with an organization, to include political, environmental, agrarian, labor, or similar causes; or an advocate of above-named causes; or a media practitioner or person(s) apparently mistaken or identified to be so.”

The order also elaborated further that EJKs refer to incidents where “the victim was targeted and killed because of the actual or perceived membership, advocacy, or profession; or the person/s responsible for the killing is a state agent or nonstate agent; and the method and circumstances of attack reveal a deliberate intent to kill.”

That order was issued interestingly enough during the tenure of Duterte’s predecessor, former president Benigno Aquino III, who refuted claims by his critics that there were no EJKs in his watch at a time when media practitioners were being killed by the subjects of their exposés on corruption and abuse.

The PNP previously claimed that the lone EJK involved a media practitioner but had since corrected itself and said there was not a single EJK recorded more than a year after the President assumed office.

At this point, the PNP’s claim can be refuted easily with two high-profile cases: the murders of South Korean businessman Jee Ick-Joo and teenager Kian delos Santos.

Let’s focus on the order’s phrase mentioning that the “person/s responsible for the killing is a state agent or non-state agent; and the method and circumstances of attack reveal a deliberate intent to kill.”

In Jee’s case, not only was there an intent to kill, but the police officers responsible even had the brazen gall to demand a multimillion-peso ransom from the victim’s wife long after he had been executed on mere suspicion of illegal drug involvement.

And did we mention that the murder occurred in front of the PNP’s national headquarters in Camp Crame? But wait, the PNP isn’t selective about its targets as shown by the murder of Kian delos Santos, who was dragged by plainclothes police away from the range of security cameras and gunned down.

In both cases, President Duterte had to salvage the PNP’s reputation first by suspending their campaign and second, by assuring Kian’s parents that the police officers responsible for their son’s death will be held accountable for their action.

Based on these cases — that are far from being isolated — the PNP’s claim is both unfounded and totally unjust to the families of the EJK victims who were executed rather than tried in court for their alleged crimes.

Read Next
Celebrities should do more to help the poor