The real gems of Surigao 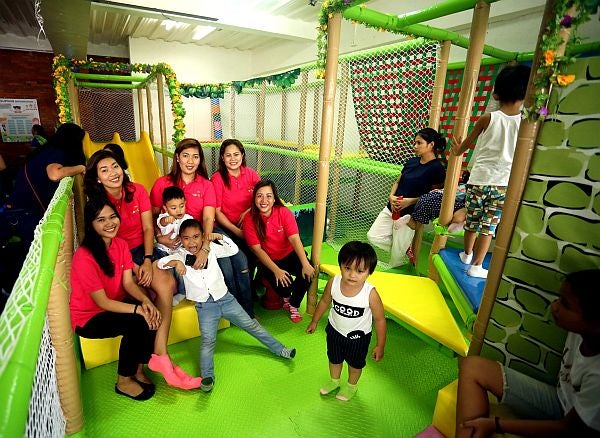 A woman. A playhouse. A city.

Surigao City —The invitation to attend the launching of a playhouse in this part of the Philippines reached my inbox with a question: “Nanay, you like?”

It was my lifestyle editor asking me if I was interested to attend the launching of a playhouse in Surigao City by a company called New Luxe International Inc. I scrolled down and saw the picture of an indoor playhouse, the same kind where I leave my husband and the three mutants when I am off running some errands in a mall.

The invitation made me ask two major questions: What kind of company will fly in a reporter and a photographer to cover the launching of a playhouse? Who is the owner of this company who seemed so confident in bringing a media team from Cebu to document a playhouse launching?

After giving a 45-minute feature writing lecture-workshop with elementary pupils of Lapu-Lapu City on a Saturday, I hopped in a taxi which brought me to the Mactan-Cebu International Airport. Our photojournalist Lito Tecson, whom I address as Kuya Tolits since 2006, was there waiting for me.

We took a Philippine Airlines flight from Cebu City to Surigao in a Bombardier Q300 airplane, a smooth and comfortable one-hour flight which I spent in deep slumber.

The backpack duo that we were, Kuya Tolits and I went out of the airport to look for the company’s chief executive officer, Judy Cometa-Go. She was in a black car with a driver, whom she introduced as a Diocesan priest.

From the back seat of the car where I was seated, I studied the woman whom I imagined as someone in her 40s with grown-up children helping her in the business.

But Judy was not 40 years old and she does not have any grown-up children.

She later revealed that she is 31 years old (my age!) with two kids: Jusseph Jess, six, and Chris John, three. She is married to Jess Gregori Go, a fellow Surigaonon.

As we drove around the city, I had a sudden flash of memories from my high school days in Ormoc, a small city with tricycles as the
primary means of public transport.

I also remember a moment in 2012 when I suggested to my friend and then German development worker partner Janina Wohlgemuth that we should move to Dumaguete to avoid the stressful Cebu traffic.

Life in Surigao, like Ormoc and Dumaguete, moves in a much slower pace than the urban hotspot that is Cebu.

For two people who thrive in an industry where speed is king, Kuya Tolits and I were tapping our feet while waiting for the cashier to punch our orders, take our money and get our food.

We reminded ourselves this is not Cebu and that we should revel in the slow-paced environment for this is only a two-day trip.

We had dinner at Bebie’s Barbecue where we were joined by an army of Judy’s friends and workers.

Here is a woman whose friends are mostly composed of priests and soon-to-be priests, who dines with her staff and who personally serves the media with her genuine and sincere Surigaonon hospitality.

During the dinner, I learned that she is a native of Siargao Island who spent her high school years in Surigao City. She finished a degree in Accountancy at Xavier University -Ateneo De Cagayan and went on to work as a quality assurance manager for a Cebu-based BPO company for more than a year.

She later moved to logistics company where she worked as an administrative staff while studying her Master’s Degree in Business Administration for Executives at Southwestern University (SWU). She was 23 years old.

Shortly after that, she immersed herself in a journey to obtain her doctorate in Public Administration from the same university.

She finished this with flying colors while helping her husband run their printing and advertising business, which is located in downtown Cebu. At present, Judy a fourth-year law student at SWU.

On a Sunday, we made our way to the second floor of LML Building where New Luxe’s Playhouse was officially opened to the public.

It was inside her first Playhouse venture that Judy narrated her entry in the world of children’s playground.

Judy frequently travels to the southern Chinese city of Guangzhou, the country’s manufacturing hub, to source materials for their printing business. But in one of her trips, she visited a showroom of children’s playground and the sight floored her quite literally.

A playground is a child’s heaven and an exhausted/loving mother’s ally in bringing joy and fun to her children.

In what was initially a move to set up a playground for her two boys later evolved as a business endeavor. She worked on a feasibility study and learned that there were no suppliers in the Visayas and Mindanao for this type of products.

Judy found her niche. She opened an office in Banawa, Cebu, and started accepting orders since December 2016.

Her clients include schools, houses and resorts.

As she opened her first playhouse in Surigao City, Judy shared her plan to open other playhouses in the cities of Mandaue and Lapu-Lapu in Cebu which will cater to children between the ages of four and 12.

“Playhouses help develop a child’s cognitive skills. As a mother myself, I love to see children having fun in a venue where parents are assured that their children are safe and  secure,” she said.

New Luxe’s Playhouse has three areas: toddler area, huge blocks area and the indoor playground. The 120-square-meter playhouse promises to be a venue of fun and learning for children.

Surrounded by Surigao City’s local media, Judy shared how the Playhouse can be a venue for birthday parties with 25 children as the maximum number of participants.

“This space can accommodate 50 children but I don’t want this venture to be just about money. I care about
the quality of fun that children experienced and that can be achieved by limiting the number of kids who come here,” she emphasized.

By the end of the press conference, Kuya Tolits and I went back to our hotel to pack up.

We sailed for Cebu that evening.

We did not visit any tourist spots for this Surigao City trip. But I feel like I was given a glimpse of the very reason why this city continues to grow
in the spirit of Maradjaw, Karadjaw (which literally translates to “very good”).

People like Judy—and her drive to elevate the Surigaonons’ quality of life with a simple yet meaningful offering such as a Playhouse—makes all the difference.

It made this visit more relevant than a two-day hurried trip to some tourist sites whose history and significance were not even discussed because
of time constraints.