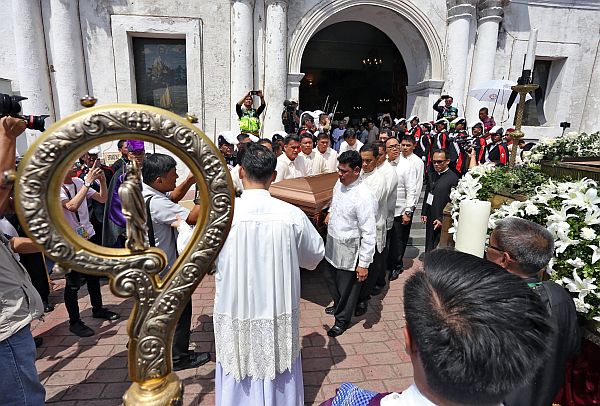 The coffin containing the remains of the late Cebu Archbishop Emeritus Cardinal Vidal is loaded in a carroza for the funeral procession outside the Cebu Metropolitan Cathedral going to the mausoleum at the back of the Cathedral. (CDN PHOTO/JUNJIE MENDOZA)

IT was a peaceful and orderly funeral, befitting a man of peace.

Crisanto Baquero, 63 years old and a resident of Barangay San Roque, Cebu City, was among the mourners who conquered the heat and joined the funeral procession of the late Archbishop Emeritus Ricardo Cardinal Vidal, riding his old wheelchair. He was stricken with polio when he was three years old.

“Kailangan malipay ta karong adlawa. Kay kon maguol man gud ta, si cardinal pud maguol magtan-aw nato (We should be happy today. Because if we grieve, the cardinal would be sad looking at us),” he added.

He prayed to the cardinal to bring his prayer to God to see his wife Minda and son Bryan May Baquero, from whom he was separated for more than 10 years.

(I only asked for cardinal to bring my prayers to God so that my problem with my wife will be settled, and we will reconcile.)

He said he has not seen his family since 2006 and heard they were now in Negros Occidental.

He stood in faith, hoping Cardinal Vidal would intercede for him.

Meanwhile, a 76-year-old candle vendor also offered a prayer for the eternal rest of Cardinal Vidal.

“Maayo man kaayo na siya namo. Maayo lang unta iyang pagpanaw pud. (He was really good to us. I pray that he may rest in peace),” Corsing Anyos said.

She said she was saddened by his death but that death was part of the natural order.

A retired seafarer who was following the carroza of the cardinal during the procession had mixed feelings.

“Nasubo kaayo ko sa iyang kahimtang tungod sa iyang kamatayon ug nalipay nalang sab ko kay nakapahuway na g’yud siya (I was saddened by his death but at the same time I am also happy that he can now finally rest),” he said.

The people who could not enter the mausoleum waved their goodbyes, and others shed tears as Cardinal Vidal’s casket was lowered to the ground.

Joseph Limpangog, 45, also braved the heat and was watching the funeral through a large television screen outside the Cathedral.

“Malipayon ko kay tungod sa iyang pagkamaayo nga pagka-cardinal (I am happy because he was a good cardinal),” he said.

While admitting he did not know the prelate personally, he was still respectful of him who had served the Catholic Church for more than 30 years.

Read Next
The man named Ricardo