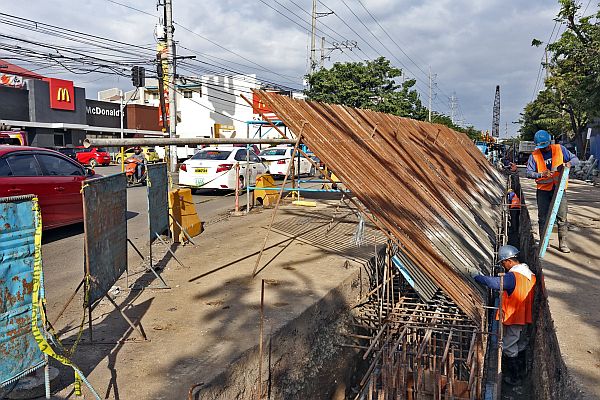 Traffic and police authorities are drawing up new traffic routes for southbound motorists as the construction of the P683-million underpass along N. Bacalso Avenue reaches its second phase.
CDN PHOTO/JUNJIE MENDOZA

The scheduled closure of the southbound lane of N. Bacalso Ave. in Cebu City for the next phase of the P683-million Department of Public Works and Highways (DPWH) underpass project in the area has been deferred to Monday, November 13.

Cebu City Transportation Office (CCTO) operations head Francisco Ouano announced the postponement after CCTO found that DPWH-7 and its contractor, WT Construction Incorporated, still needed to remove obstructions on the northbound side of the highway and cement portions of the road.

“We are also looking at the safety and security of our motorists that have to pass by the area,” said Ouano, adding that DPWH-7 and its contractor will work on these concerns over the weekend so that the southbound lane can be closed to traffic beginning 6 a.m., Monday. The closure is expected to last from three to four months.

The closure of the southbound lane was supposed to be scheduled yesterday morning. However, the defects noted by CCTO prompted officials to call for a meeting with DPWH-7 along with Councilor Dave Tumulak, deputy mayor on police matters.

DPWH-7 Project Engineer Roy dela Cruz acknowledged the concerns raised by Ouano and agreed to postpone the start of the project’s next phase.

He said this will also give CCTO more time to properly assign traffic enforcers in the area since the impending closure is expected to cause heavy traffic along N. Bacalso Ave.

During the meeting, Tumulak assured DPWH-7 officials that aside from CCTO personnel, the Cebu City Police Office (CCPO) will also deploy policemen to help manage traffic in the area.

Once the closure starts, only one lane of the northbound side — the outermost lane — will be open to vehicular traffic while the rest of the road will be closed.

The CCTO advises motorists, especially private vehicle owners, to take alternative routes to avoid having to pass by the project area located at the intersection of F. Llamas St. and N. Bacalso Ave.

CCTO is set to come up with a rerouting scheme for affected public utility jeepneys (PUJs).

Meanwhile, the head of the Police Regional Office in Central Visayas (PRO-7) Chief Supt. Jose Mario Espino announced that “discipline zones” will soon be set in place to address growing traffic problems in Cebu City with the onset of the Yuletide season.

According to Espino, the discipline zones which will be cleared of sidewalk vendors and street mendicants will be areas that have often become a traffic bottleneck.

While PRO-7 is still in the process of identifying these areas with the help of city and barangay officials, Espino identified two pilot areas where the scheme will be tested: Fuente Osmeña and the area around JY Square in Barangay Lahug.

Police authorities are also preparing for the influx of more tourists in Cebu with the coming of Christmas.