Police warn devotees: Keep an eye on your kids, things 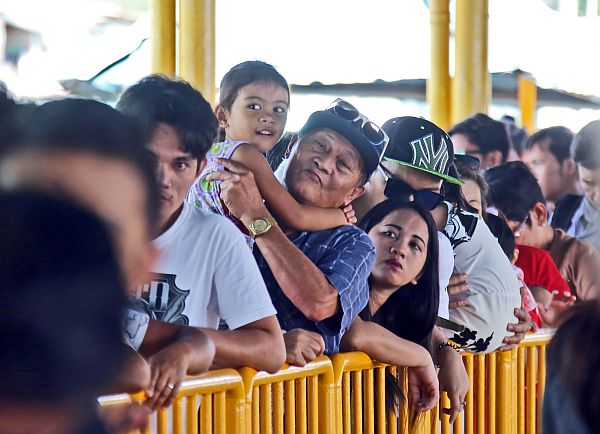 Keep an eye on your kids and valuables, is today’s most valuable advice to the thousands of devotees who will converge in Lapu-Lapu City for the fiesta celebration of the Virgin of the Rule like this crowd lining up for a ferry ride in Pier 3.
.(CDN PHOTO/JUNJIE MENDOZA)

Be vigilant with your belongings and always keep an eye on your kids.

This was the warning issued by Supt. Elmer Lim, the deputy city director for operations in Lapu-Lapu City Police Office (LLCPO), for the thousands of devotees expected to converge on the island today for the fiesta celebration of the Virgin of the Rule.

“We always remind the public, especially if there are activities and major events, to be vigilant on their own belongings. Be responsible too. If they bring children, keep an eye on them,” Lim said.

And although today is fiesta day, Lim said that the curfew ordinance will still be strictly implemented. However, they will not rescue minors found still roaming the streets beyond the 10 p.m. curfew but would just advise them to go home. Those who will refuse will be brought to their respective barangay hall, Lim disclosed.

Yesterday, thousands of devotees of the Virgin of the Rule joined the afternoon procession.

More than 200 police personnel of the LLCPO were deployed in the vicinity of Barangay Poblacion, Lapu-Lapu City, since early Sunday until tonight to ensure a peaceful and orderly fiesta celebration. Public assistance tents were also put up especially near the church manned by four police officers on a 24-hour shift.

Lim said the almost one-kilometer procession which lasted about an hour was attended by an estimated crowd of 6,000 devotees.

The Virgin’s image was placed on a carroza decked with different kinds of white flowers. It went out of the Virhen dela Regla (VDR) Parish at 4:30 p.m. following the 3 p.m. Mass.

No untoward incidents were reported during the hour-long procession. “It was generally peaceful and successful until it returned to the church,” said Lim.

Lim added that as of 6 p.m. last night, there were no reported crimes or violation of any city ordinance in relation to the fiesta. Additional police and force multipliers were also deployed at the Hoops Dome for the huge crowd that watched last night’s Miss Lapu-Lapu Pageant. The carnival rides and games are also found in the area.

Police are also being deployed at the VDR Parish as more devotees are expected to venerate the Virgin of the Rule image at the Shrine today.