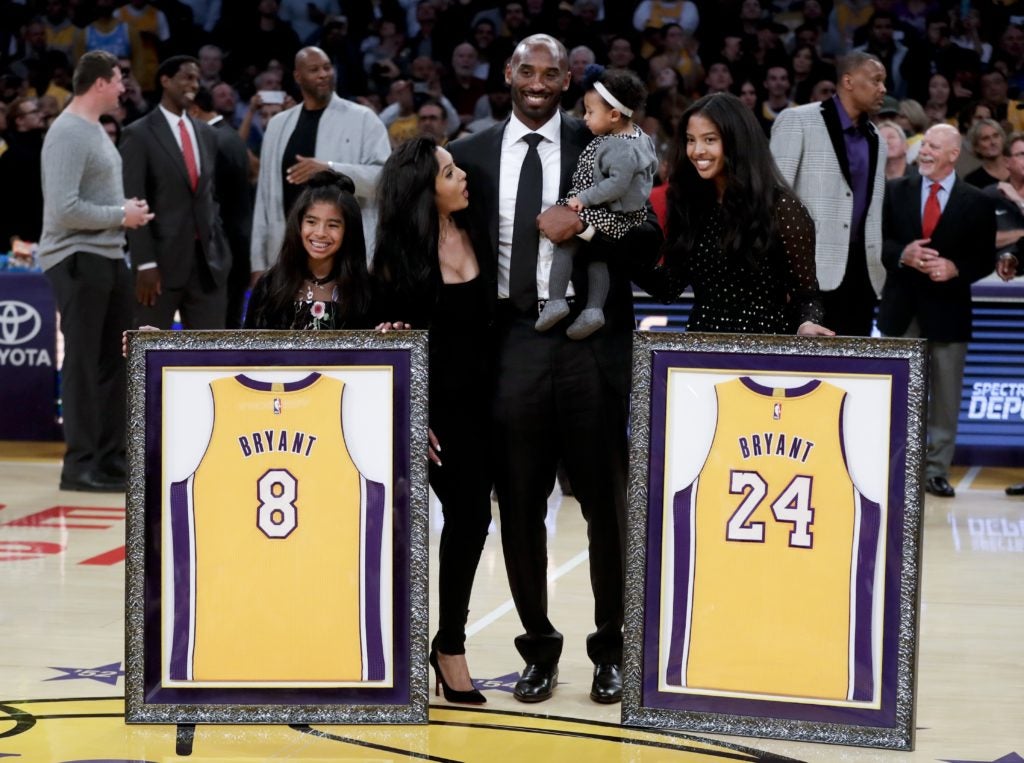 Former Los Angeles Laker Kobe Bryant poses with his family during an NBA basketball game between the Los Angeles Lakers and the Golden State Warriors in Los Angeles, Monday, Dec. 18, 2017. The Lakers retired Bryant’s No. 8 and No. 24 jersey during a halftime ceremony. (AP Photo/Chris Carlson)

Klay Thompson had 17 points and 10 rebounds as the defending NBA champions predictably dampened a celebratory night for the Lakers, who retired Kobe Bryant’s two jersey numbers during a halftime ceremony.

Perhaps in tribute to Bryant, Durant and Thompson never stopped shooting even when they weren’t making many. The duo combined to miss 31 of its first 40 shots, but Durant went 4 for 4 in overtime, capped by that pure go-ahead jumper in OT.

The Lakers had a chance at the end, but David West blocked Lonzo Ball’s shot and Brandon Ingram couldn’t beat the buzzer.

Kyle Kuzma scored 25 points in a reserve role and Ingram added 19 for the Lakers, who have lost three straight and eight of 10. Ball had 16 points, six assists and six rebounds.

Stephen Curry missed his fifth straight game with a sprained ankle, and Draymond Green sat out for the fourth time in five games with right shoulder soreness. Durant and the Warriors still had enough to handle the Lakers.

HOUSTON (AP) — Eric Gordon scored 17 of his season-high 33 points in the fourth quarter to power a huge run that put Houston on top, and the Rockets cruised past Utah for their 14th straight win.

Houston used a 15-0 run early in the fourth to take the lead and was up by four midway through the quarter after a layup by Joe Ingles. The Rockets then scored 11 points in a row, capped by two 3-pointers from Gordon to make it 111-96 with about three minutes to go.

James Harden added 26 points, Clint Capela had 24 points and 20 rebounds and Gordon finished with a season-high seven 3-pointers.
The Rockets struggled from long range for most of the night, making just nine of 31 3-pointers in the first three quarters. They found their groove in

the final period, when they made eight of 12 with five from Gordon to pull away for their 20th win in 21 games.

Rodney Hood had 26 points off the bench for the Jazz, who have lost six of their last seven games.
Other results: