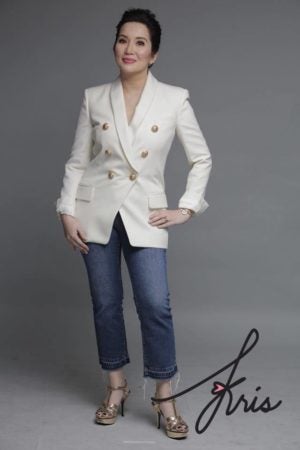 KRIS Aquino proved that she has no space for negativity and bashers on her social media account.

Showing her support for the film, Aquino hosted a block screening on Thursday as Gonzales returned to the country after her holiday trip to Japan.

Replying to the basher, Aquino said: @wonder2505 this is a troll/fake account that deserves a clapback: GET A LIFE & GET YOUR FACTS

STRAIGHT! I’m the ninang of Direk Paul and Toni- this #fakenews is just malicious. Direk and Toni are SOLID happy. Ka text ko si Toni last night
and she thanked me for the block screening.”

She also said hinted that Gonzales has a handsome and intelligent suitor.

Reacting to rumors linking Gonzales and Soriano, Aquino on her Facebook page revealed a conversation she had with Gonzaga.

To which Gonzales who was seated beside Aquino replied with a laugh: “Patay tayo dyan.”

Sabi niya: “So wala ako talagang pangamba at all.” Sabi ko: “Thank you Lord. Thank you God. Thank you so much.”

Aquino, on her Instagram post, described Gonzales as family, and she considers her as “tita” to her sons Josh and Bimby.

Gonzales replied to Aquino and thanked her for supporting her and their film, “Siargao.”

“Thank you very much Ate Kris!! Excited for tomorrow! I love you,” the actress said.

Soriano also left a comment on Aquino’s post and said, “Thank you Ninang @krisaquino really appreciate your support!! Hope you enjoy the film.

Aquino described the film as a “great date movie.”