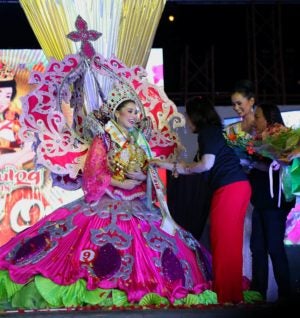 Cebu has a new queen. That is, Sinulog Festival Queen in the person of Shaila Mae Del Mar Rebortera, the candidate of Talisay City.

Rebortera, who also won the most number of special awards, bested 11 other candidates to win this year’s coveted Festival Queen honor.

The other winners were Mary Faith Libres of Catbalogan City, Samar, first runner up; Bianca Willemsen of Carcar City, second runner up; Isabel Luche of Daanbantayan, third runner up; and Maerylle D. Blauta of Abuyog, Leyte, fourth runner up.

The three-hour pageant highlighted by eye-popping and colorful costumes was one of the most awaited events during the annual Sinulog Festival, a faith-based festivity in honor of the Señor Sto. Niño (Child Jesus) that began on Jan. 12 and will culminate on Sunday, Jan. 21.

The Best in Group Presentation was also won by Tribu Katbalaugan dancers led by Libres.