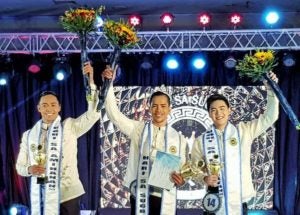 Candidate no. 12 Elcid Camacho bested 13 other good-looking men for the title.

“Well, it’s really overwhelming. I’m so glad, I’m so thankful. Thank you God. Thank you everyone. Thank you all who supported me,” he told the reporters after the pageant.

During the first segment, the 13 candidates paraded in “Hari”

costumes, then in swimwear, Bench underwear, and lastly, formal wear before they were trimmed down to seven candidates.

The seven candidates were judged based on the following criteria: 40 percent for beauty and face, 35 physique, and 25 wit and intelligence.

Camacho got the topic about “discrimation.”

“Discrimination is very rampant in this generation today. There are so many judgmental people. For me discrimination is really something that we need to end. We are all created by God, fair and equal,” Camacho answered.

Camacho won P50,000 cash. He also received other special awards such as Best in Swimwear.

He also represented Bohol at Misters of Filipinas 2014, which was won by PO2 Neil Perez.

After winning the pageant, Camacho is considering joining Misters of Filipinas 2018 and this time to represent Cebu.

“I feel very blessed and honored to be part of the three people who got the responsibility. I think after this pageant I will continue with what I desire for which is business and entrepreneurship,” Lim said.

Lim, who is from Barangay Tinago, Cebu City is an internet enterpreneur. He also joined Mr. Chinatown in 2017.

“I’m happy because of the experience and the people around me,” Petallo told the reporters.

Currently, Petallo is waiting for the results as he screened last Saturday for the Century Tuna Superbods Ageless 2018.

French Bonn Petallo, 28, is a trainer in a call center company in Cebu City. He hails from Surigao City. He won Hari ng Lapu-Lapu in 2014.

The pageant was hosted by Ms. Earth 2008 Karla Henry.

Winners of Corporate and Special Awards

Darling of the Press: Clarence Lim