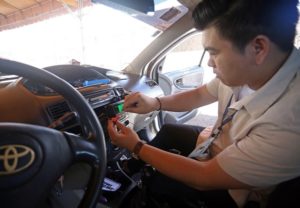 An LTFRB-7 personnel works on the taxi meter that was brought to their recalibration center at the South Road Properties (SRP) on Thursday.
/CDN photo/Lito Tecson

Since Monday, the Land Transportation Franchising and Regulatory Board in Central Visayas (LTFRB-7) has so far recalibrated the meters of only 17 of the 6,000 registered taxi units in Cebu.

LTFRB-7 Director Ahmed Cuizon said operators have until June 4 to submit their units for recalibration to avoid payment of the P200 per day fine.

“Ayaw namo paglangay-langay aron maka benepisyo namo sa inyong gihaguan (Comply with the recalibration requirement as soon as you can so you can already benefit from the increased fare),” he said.

Cuizon said only drivers of recalibrated units are allowed to collect the increased taxi fare rate which LTFRB approved on October 4, 2017.

Under the approved rate, drivers will now be allowed to collect the P40 flag down rate for the first 500 meters. Another P13.50 will be added per

Taxi driver Janny Superales, 36, said he is looking forward to collecting the increased taxi fare.
A driver for 15 years, Superales said any additional income is expected to help caution the effects of the implementation of the Tax Reform for

Acceleration and Inclusion (Train) Law especially on the increasing cost of fuel.

Cuizon said they will accommodate taxi units based on the last digit appearing on their respective plate numbers.

Cuizon said operators will be asked to pay at least P1,100 to cover the cost of the recalibration, testing and resealing of the taxi meters, inspection and verification fees and legal research fee.

On top of the recalibration requirement, operators will also be required to install Global Navigation Satellite System (GNSS), Wi-Fi connection, closed-circuit television (CCTV) camera and dashboard camera on their units.

“These gadgets are for the safety and convenience for our passengers,” Cuizon said.

Read Next
Bello: Private hospitals are no. 1 violators of labor laws