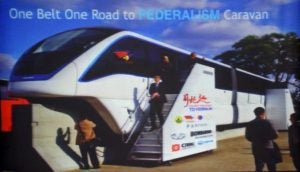 While government spending on infrastructure projects recorded an increase in 2017, big-ticket projects from the private sector have also continued to come in especially for Cebu.

One of the most anticipated public-private partnership (PPP) projects in Cebu is the P22.6-billion Cebu-Cordova Link Expressway (CCLEX) project, which is expected to start construction by June this year.

But another anticipated multi-billion-peso project, if it pushes through, is the PhilTram Transportation Consortium Inc.’s plan to build the Cebu monorail project.

Eviota said the feasibility study (FS) for the project, which is being done by Systra Philippines, was supposed to have been completed already.
However, it had to be expanded since the route of the project would include Consolacion town following an adjustment in its alignment.

“This (FS) will be completed next month (March). By then, we will submit PhilTram’s unsolicited proposal to the Department of Transportation (DOTr by April),” he said.

The budget for the project is pegged at US$1 billion or roughly P52 billion. This amount will cover land acquisition for its depot, some sites for stations, and road right of way acquisition, if needed, among others.

Last November, Guardo presented initial findings of the FS for the project which stated that the “economically viable” route for the monorail will be starting at the South Road Properties (SRP), going to N. Bacalso Ave., to S. Osmeña Road, all the way north to Mandaue City.

Although this time, Eviota said it would extend up to Consolacion.

“On the feasibility study, we don’t want to submit incomplete documents. It’s not just the FS alone. We are doing things step by step with due diligence,” Eviota said.

For the source of funds, he said it would be channeled through a government financing institution like the Development Bank of the Philippines which would formally syndicate the funds for the project which would be fully funded by the private sector.

It will be pursued through the PPP scheme “BGTOM” or build, gradual transfer, operate and maintain.

After the unsolicited proposal is submitted to the DOTr and PhilTram is granted the original proponent status, detailed engineering and design will follow and will last for six to nine months.

“The project can start by end of this year or Q1 of 2019. As it will only take two years for the civil works plus installation of signaling system, etc., plus the test runs for the rolling stocks; Cebuanos should start to enjoy this mass transport system by the start of 2021,” Eviota explained.

Another significant initial result of the FS for the monorail project is that the “willingness to pay” among Cebuanos for the monorail is pegged at P11 for the first three kilometers and an additional P1 for each succeeding kilometer.

The monorail system will work harmoniously with the P16.3-billion Cebu Bus Rapid Transit (BRT) project because it will be located 5.5 meters above the existing roads.

The BRT implementation office, however, is still finalizing procurement documents for the construction of the project.

Procurement for the construction contractor is targeted within this year so that actual construction can start in the latter part of 2018 or by early 2019.

Meanwhile, the monorail will be fully automated, which means it won’t have any drivers. There are emergency catwalks though in case there are problems with the trains.

The proposed monorail will have six coaches which can carry up to 750 passengers. PhilTram also assured that the train intervals will only be 90 seconds even during peak hours and that it can run for up to 80 kilometers per hour.

Glenn Soco, chairperson of the IDC-RDC, said proposals from the private sector are good complements to those infrastructure projects also being funded by the government.

“I feel that there is really a need to have effective mass transport systems in Cebu. But we leave that to the DOTr, which is the proper agency, to decide what mode of system is needed in Cebu,” Soco told CDN.

“We welcome these projects from the private sector. Cebu is already an economically viable metropolis that’s why there are several proposals for PPPs and joint ventures. These are good as other means of having infrastructure projects which can be implemented faster and in a more efficient manner,” he added.

And with the “Build, Build, Build” thrust of the Duterte administration, Soco said Cebu would continue to feel the infrastructure boom even more in the coming years.

The Department of Budget and Management (DBM) recently revealed that the government spent P568.8 billion on infrastructure projects in 2017.
The amount is 15.4 percent higher than the amount spent in 2016 which was at P493 billion.

Read Next
STILL THE BEST