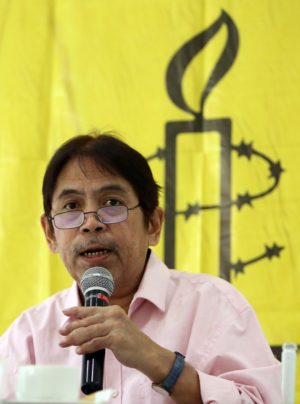 STATE OF HUMAN RIGHTS IN THE PHILIPPINES. Jose Noel Olano section director of Amnesty International-Philippines, reads the State of the World’s Human Rights Report focusing on the Philippines in a press conference in Cebu City on March 9, 2018
(CDN PHOTO/LITO TECSON)

This was how Amnesty International described the state of human rights in Central Visayas and the rest of the country since President Rodrigo Duterte assumed his post in July 2016.

“There’s a human rights crisis in our country right now, and we have not experienced anything like this since the Martial Law period (in 1972 to 1981),” said Jose Noel Olano, section director of Amnesty International (AI)-Philippines, in a press conference in Cebu City on Friday.

While there are no concrete proofs that the government has something to do, much less sanctioned, the rising body count in the war against illegal drugs, Olano said no “meaningful” investigations into the killings of drug suspects have been made.

In Cebu and other parts of Central Visayas, policemen were found to be the top violators of human rights, said Olano.

“Law enforcers are duty-bound to respect human rights, not only in implementing national policies such as Oplan Tokhang but in all their actions to actively protect human rights against abuse,” said Olano as he read the annual report of the London-based non-governmental organization focused on human rights.

“When they fail to do so, either by committing human rights violations through the unlawful use of their powers or by failing to protect people against human rights abuses by others, they must be held accountable,” he added.

“What was their basis in saying so? That is just their perception. The killings have been investigated, and there have been no proofs that the police are involved or violated human rights,” he said in an interview on Friday.

“Are they investigators? If not, why do they say there are human rights violations in Central Visayas? They should know that we, policemen, are doing our jobs professionally,” he added.

Based on the records of PRO-7, at least 188 drug suspects in the region were killed in alleged shootouts with policemen, while 213 others were gunned down by still unknown assailants since July 1, 2016.

On the other hand, at least 9,466 drug suspects were arrested in the region, while some 108,742 drug users and pushers surrendered to authorities at the onset of Oplan Tokhang (toktok hangyo), a police door-to-door anti-drug campaign where suspects are asked to surrender and sign documents renouncing their involvement in illegal drugs, either as a user or a peddler.

But AI stressed that most of the killings remain unsolved.

In its annual report, the group noted that the wave of unlawful killings across the country followed the election of President Rodrigo Duterte whom they considered as among the world’s worst leaders when it comes to human rights compliance.

“The deliberate, unlawful, and widespread killings of thousands of alleged drug offenders appeared to be systematic, planned, organized, and encouraged by the authorities, and may have constituted crimes against humanity,” Olano said.

Most of those killed, he said, were from poor urban communities.

For fear of reprisal, relatives of those killed in police operations opted not to file complaints against policemen.

“So far, no police officer was known to have been held accountable,” Olano said.

AI also noted that human rights defenders critical of the administration’s campaign against illegal drugs were singled out and targeted by President Duterte and his allies.

They cited as example the case of Sen. Leila de Lima who was arrested on charges of drug trafficking after becoming the most prominent critic of the war on drugs.

Olano said AI also mentioned President Duterte’s attacks against the Commission on Human Rights (CHR) as the administration-backed “supermajority” at the House of Representatives earlier approved a budget of just P1,000 for the commission before the decision was overturned in the Senate.

Also pointed out in the report was the increasing number of arbitrary arrests of political activists, and the Security and Exchange Commission’s (SEC) revocation of the registration of online news outfit Rappler for supposedly violating the Constitutional prohibition against foreign ownership of media.
The Amnesty International annual report will be sent to the Office of the President.

“We hope the government will respond to it by providing solutions instead of issuing derogatory comments which will just muddle the issues,” said Olano in anticipation of what could be another tongue-lashing from President Duterte.

Maria Edilyd Orias-Palma, program coordinator of AI-Philippines, said their annual report was launched in Manila last February 22 before they brought it in Cebu on Friday.

“We will also present the report in Cagayan de Oro on March 15 and Baguio on March 23,” she said.

Amnesty International’s “State of the World’s Human Rights” covers 159 countries and delivers a comprehensive analysis of the state of human rights in the world today.

Olano urged President Duterte and other local government officials to do something to end the series of killings and other human rights violations.

“The lack of human rights leadership is already showing dangerous consequences not only in law enforcement but in other branches of government.

Some may think it’s inconvenient to raise human rights in this climate, but it is more vital than ever that we all do so,” Olano said.

“With more and more Filipinos campaigning proactively for human rights, the Duterte government has little excuse to not do the same,” he added.

Olano challenged the police and other law enforcement units to lead by example by respecting human rights.

“Although we understand that in the fulfillment of their duties, they may sometimes use specific powers such as the use of force and firearms, arrest and detention, and search and seizure, we still expect them to comply with their obligations under national and international policing standards when exercising these powers,” he said.

“If law enforcers do not respect a person’s right to life which seems to be the norm in the war on drugs, how can the community trust them in combating other abuses against the disadvantaged?” he added.

In Cebu, at least 28 persons were gunned down in the cities of Cebu, Lapu-Lapu, Mandaue and Talisay, and Minglanilla town since Feb. 16, based on police reports.

Most of the victims were killed by still unidentified assailants.

The latest victims were Eduardo Bering, 38, and Aldrin Paquibot, 26, who were shot dead by unknown gunmen in separate incidents in Lapu-Lapu City before dawn on Friday.

Chief Insp. Judith Besas, deputy chief for operations of the Lapu-Lapu City Police Office, said they have yet to determine the motive behind the killing.