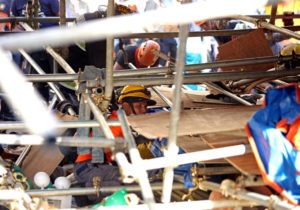 Despite the danger, rescue workers continue to search for more victims trapped underneath the debris of a bunkhouse in Barangay Lahug, Cebu City that collapsed on March 6, 2018. The operation of the company that owns the bunkhouse, J.E. Abraham C. Lee Construction and Development Inc. (ACLI), is now being scrutinized by the Cebu City government.
CDN PHOTO/LITO TECSON

The owner of the collapsed bunkhouse in Barangay Lahug handed payment amounting to P300, 568.50 to the Cebu City Treasurer’s Office on Friday afternoon as a settlement for their company’s tax liabilities with City Hall.

But the payment was made “under protest” and “subject to the final findings of our External Auditor Mr. Luis Cañete,” said Teita C. Alejandria, the company’s chief financial officer.

Alejandria wrote OIC City Treasurer Veronica Morelos on Friday to inform her of the payment that their company made on the same day.

There is some confusion on the declared gross sales for services rendered by the company that is subject of the business tax,” said Alejandira’s one-page letter, a copy of which was posted on the Facebook page of J.E. Abraham C. Lee Construction and Development Inc. (ACLI) at around 6 p.m. on Friday.

ACLI also posted on FB copies of the official receipt and the statement of delinquent taxes, fees and charges issued by City Treasurer’s Office.

Morellos said the delinquency happened after gross receipts for the company’s construction services and real estate development services were interchanged.

Alejandria, in her letter, said there is an ongoing company audit to correct discrepancies in their records.

“We implore your patience on this matter to allow our auditors to complete the ongoing audit of the company to determine the correct amounts of gross sales declaration to correct any errors with both the BIR and City Hall, if any,” said Alejandria.

“We expect to have this clarified within a few weeks and should there be any additional liabilities above and beyond the above amount, you can expect us to fully cooperate and pay the necessary fees.”

However, Alejandria said that in the event of overpayment, their company would also expect the overpayment to be credited to their future tax dues with City Hall.

“We do our best to comply and pay in time all City Hall assessment as evidenced by our 2014 overpayment and current accounts for 2016 onwards.

There is just some misunderstanding on these 2014 and 2015 amounts that did not tie up that is why we have started an audit with the respectable firm of Mr. Luis Cañete,” said Alendria’s letter.

Read Next
Retailers complain about poor quality of NFA rice