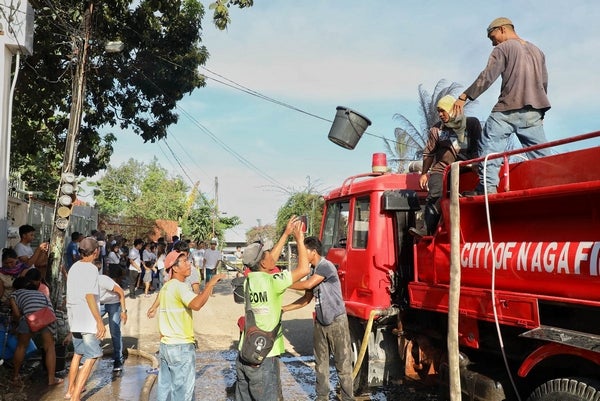 Families help firefighters get water from a fire hydrant to put out the fire that eventually destroyed their homes in Minglanilla town, southern Cebu. CDN Photo/Tonee Despojo

Fire Officer Fulbert Navarro of the Minglanilla Fire Station said they received the alarm at 2:52 p.m.

“We had difficulty putting out the fire because of the wind which kept changing direction and we only had a few fire trucks,” he said in Cebuano.

The San Fernando Fire Station and fire volunteers in Cebu City helped the local fire station to put out the fire which destroyed 20 houses and P1 million worth of property.

No one was hurt except for a dog whose face was burned. But the canine still managed to return to its master.

Navarro said the fire started at the house of couple Joe and Jenny Para whose heated argument was overheard by neighbors.

Navarro said the neighbors told them that they saw Jenny bringing items out of the house and threatening Joe that she will burn it. Thick smoke later came out of the house, he said.

Jenny was brought to the Women and Children’s Protection Desk (WCPD) of the Minglanilla police precinct after the incident.

Read Next
‘Leave my projects alone’