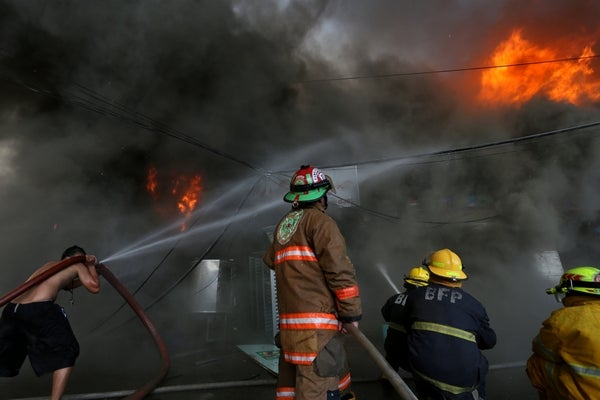 An unidentified man (left) helps fire volunteers in putting out a fire using a leaking hose. The afternoon blaze in Barangay Basak, Lapu-Lapu City, burned down 300 houses four days after a massive fire in another barangay destroyed just as many homes. CDN PHOTO/JUNJIE MENDOZA

Just last Monday, Basak Barangay Captain Isabelito Darnayla and his council donated 26 sacks of rice to the victims of a massive fire which hit a neighboring barangay in Lapu-Lapu City.

A day later, Darnayla was faced with a similar dilemma after an afternoon blaze burned down 300 houses and about 50 roadside stores and stalls in his barangay. Damage was pegged at P600,000.

Darnayla told CDN that the fire started in one of the houses located at the back of E&P Arcade, a three-storey commercial complex along Maximo Patalinjug Avenue which was also partially burned. Because the houses in the area were made of light materials, the fire spread quickly and also razed stalls and stores by the road.

The barangay chief said that the estimated 1,500 fire victims will be temporarily housed at the Barangay Gymnasium. Darnayla will also ask the Department of Education Lapu-Lapu Division if they can use some rooms of the Basak Elementary School as temporary shelters.

He said, he will immediately convene his barangay councilors for the declaration of a state of calamity to access their calamity funds for the meals of the fire victims.

SFO3 Climaco Salisid, fire investigator of Lapu-Lapu City Fire Central District said they received the fire alarm at 2:55 p.m. and immediately declared “Task Force Alpha.” At 3:14 p.m. it was raised to “General Alarm” until the fire was controlled at 4:10 p.m.
“Kusog kaayo ang hangin unya made of light materials ang kadaghanan sa mga tindahan ug balay,” Salisid cited as reasons for the quick spread of the blaze.  (The wind was so strong and most of the stores and houses were made of light materials).

The police has so far not received any report of casualties or fatalities except for two firemen who experienced difficulty in breathing after inhaling smoke. They were immediately attended to by paramedics from the Philippine National Red Cross.

Darnayla meanwhile, said that since the area is privately owned, the possibility of residents to rebuild their homes will rest on the decision of the lot owners.

The area, the barangay captain said, is adjacent to a Hypermart store which he said, had acquired another lot on the same area for their expansion.

Because of the fire, Maximo Patalinjug Avenue, a highly congested road, was totally closed to vehicles and pedestrians. However, people were later allowed to pass through.

Salisid estimated not less than 270 houses were burned including two stores and pawnshops.

He said that they also received report about a person looking for a missing child. But as of press time, this was not confirmed.