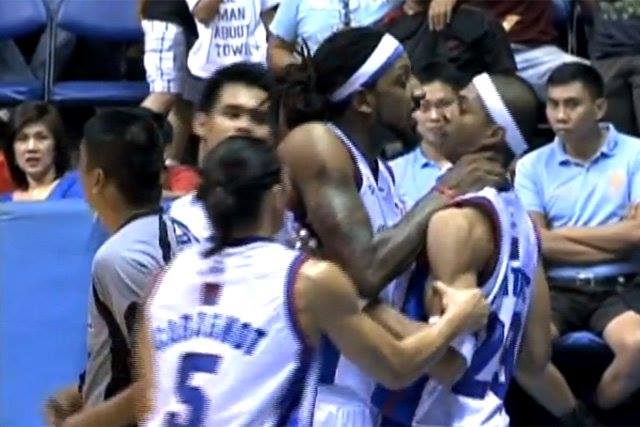 Puerto Rican basketball player Renaldo Balkman, seen here in the controversial incident in 2013 where he choked his Petron teammate Arwind Santos, will be allowed to play in the PBA again as the league lifted his ban on Tuesday.

The Philippine Basketball Association has lifted its lifetime ban on Renaldo Balkman.

PBA commissioner Willie Marcial gave Balkman a reprieve, five years after his banishment from the local pro league for an outrage during a Petron Blaze-Alaska Milk tussle.

“He wrote a letter of appeal then personally appeared in my office. But I didn’t decide just based on that. I solicited the thoughts of Commissioner Chito Narvasa and Arwind Santos. Both gave their thumbs up for the lifting of the ban,” said Marcial.

“I trust that he has learned his lesson and has become a better person and a more disciplined athlete. Good luck to him,” said Salud, for his part.

Salud, then the league commissioner, issued the lifetime ban over the incident that saw Balkman grab teammate Santos around the neck. The former New Year Knick and Denver Nugget was also slapped a fine of P250,000 for his flagrant misconduct.

But Balkman has shown remorse, repeatedly expressing deep regrets for his action.

He’s currently playing with Alab Pilipinas in the ABL and surely hopes a second chance in the PBA.

“Balkman was apologetic and gave assurance for his behaviour on and off the court. He has matured since the incident now that he’s 33,” said Marcial.

The reprieve has opened the door for Balkman’s possible PBA comeback as early as the 2018 Commissioner’s Cup that fires off on April 22.
San Miguel Beer, his team (Petron Blaze) during his outrage, still enjoys the rights of first refusal on Balkman.