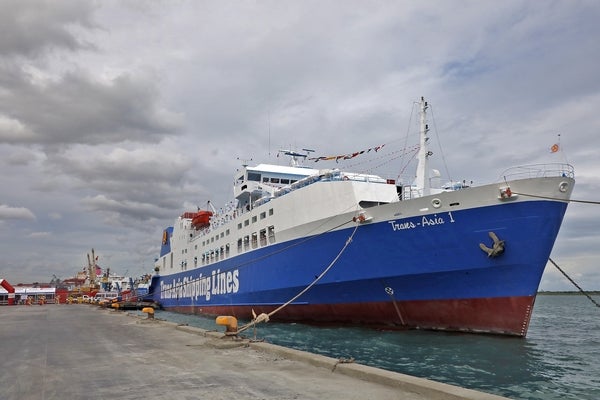 AS an archipelago, the Philippines has been relying on inter-island connectivity through sea vessels especially in the Visayas area.

For decades, shipping lines have been serving this need to transport people and goods by sea. And it continues to be a lucrative business for local shipping firms.

Despite the construction of new airports and improvements of existing ones in order to move people and goods faster, local shipping players still expand their respective footprints by developing new ports of call an acquiring new vessels.

Among them is Cebu-based Trans-Asia Shipping Lines Inc. which recently launched its biggest and flagship vessel – the M/V Trans-Asia 1.

“This is a big investment for us. M/V Trans-Asia 1 being the biggest in our fleet is just the start. It marks the beginning of our owners’ big dream of having a bolder and bigger Trans-Asia,” said

Lilibeth Tabanag, the company’s vice president for finance in a recent press conference.

Trans-Asia is investing around P2 billion this year and in 2019 for the acquisition of five sea vessels including M/V Trans-Asia 1 which costs P700 million.

According to Trans-Asia Vice President for Marketing and Sales Services Pinky Sy, M/V Trans-Asia 1 will be plying Cebu-Cagayan-Cebu route every day of the week.

Pending some more finishing touches and documentary requirements, the vessel is targeted to have its maiden voyage by the first week of September.

“Cebu-Cagayan-Cebu is also our flagship route, we have always been known for that. Every time we have a new vessel, we always put it there. We also want to show the Cagayanons that we want to give the best for them,” Sy said.

Originally built in France in 1980, the M/V Trans-Asia 1 has a gross registered tonnage of 11,457 tons. It can accommodate 1,023 people and several vehicles depending on its size.

The M/V Trans-Asia 16 will have a cargo capacity of 500 TEU (twenty-foot equivalent unit) and will be serving the Cebu-Manila-Cebu route.

On the other hand, M/V Trans-Asia 17 will be plying the Manila-Davao-Manila route. It also has a cargo capacity of 500 TEU.

The addition of its biggest and flagship vessel brings Trans-Asia’s fleet to a total of 15.

During its 44th Founding Anniversary last March 25, Trans-Asia unveiled its Vision 20/20 Program with a goal to launch 10 new vessels and add 10 new domestic ports of operations by 2020.

“We firmly believe that this vision will be realized through leveraging on our brand and experience in the domestic shipping. In addition, we see a lot of economic developments, especially those observed in the Visayas and Mindanao regions,” said Trans-Asia President and CEO Arthur Kenneth Sy in a statement.