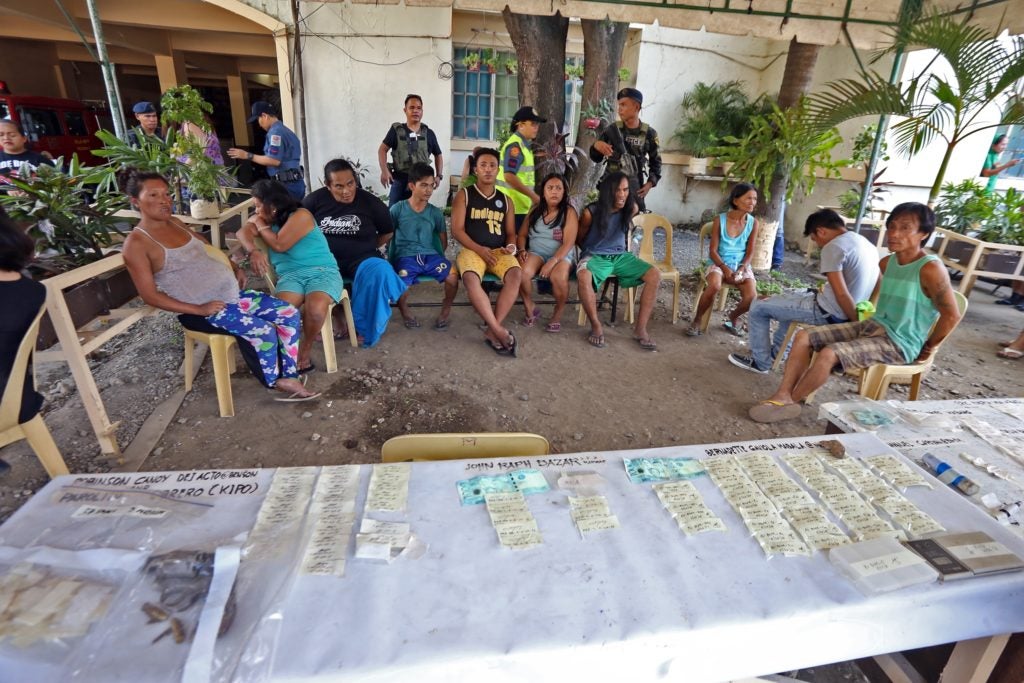 Illegal drugs with an estimated worth of P2.1 million, firearms and drug paraphernalia (on the table) were confiscated from suspected drug personalities (seated background) during a “One Time, Big Time” operations in the cities of Talisay and Mandaue on Wednesday and Thursday. CDN PHOTO/ JUNJIE MENDOZA

At least three suspected drug personalities were killed while 75 others, including a pregnant woman who was alleged to be a member of the Parojinog drug group were arrested in simultaneous police anti-drug operations conducted Wednesday evening to Thursday morning in different parts of Cebu.

It was the second one-time, big-time conducted by the Police Regional Office in Central Visayas (PRO-7) this year. The first resulted to the death of eight suspected drug personalities and the seizure of more than P8 million worth of illegal drugs.

“They were armed. We were able to confiscate firearms from their possession,” said Sinas.

Obrero and Fermin were killed in a buy bust operation while Ediza was killed in a shootout with operatives who served his search warrant.

Sinas also revealed that one of those arrested in Talisay City is believed to be a member of the notorious Parojinog drug group based in Ozamis City.

Jurilyn Pagalan, 37, was arrested by virtue of a warrant of arrest. She is said to be a native of Barangay Bitoon in Ozamis City and is believed to be eight months pregnant.

“Most likely the drugs in Barangay Tangke in Talisay City come from the Parojinog group. But we will still subject her to interrogation so that we will know the truth,” said Sinas.

Sinas said that Pagalan has a warrant of arrest in Oroqueta City in Mindanao but eluded arrest and went to Cebu.

Sinas added that Pagalan first stayed in Lapu-Lapu City were she was also included in the police drug list then transferred to Barangay Tangke in Talisay City where she was finally arrested.

In an interview, Pagalan denied the allegations and insisted that she stopped selling illegal drugs a long time ago.

She also claimed to not knowing the Parojinogs personally but is familiar with the family name because they are politicians.

“Dili ug wala koy connection nila (I am not connected with them),” said Pegalan.

Meanwhile, Talisay City Mayor Eduardo Gullas Sr., expressed concern over the perception that his city is turning into a drug haven based on the quantity of drugs and the number of drug personalities arrested there.

The local chief executive said he will try to curb the problem by increasing police visibility by putting up additional police sub-stations in at least four hotspot barangays.

Gullas is also set to meet with members of the PNP and barangay officials of Tangke to plot out strategies to stop the drug problem in the said barangay.

The “One Time, Big Time” operation was conducted two days after President Rodrigo Duterte announced, during his visit to Cebu City on Tuesday, that “almost all” policemen and agents of the Philippine Drug Enforcement Agency (PDEA) in Cebu are “addicts” and are involved in the illegal drug trade.

But Sinas said the operation was not conducted because of the President’s comments but was planned weeks prior to Duterte’s visit.

Sinas admitted that illegal drugs remain a big problem in Cebu but that his men are doing their best to curtail it.

Read Next
Loot in hiding, fears for his life