Long-term programs for agri sector, not cap on rice prices 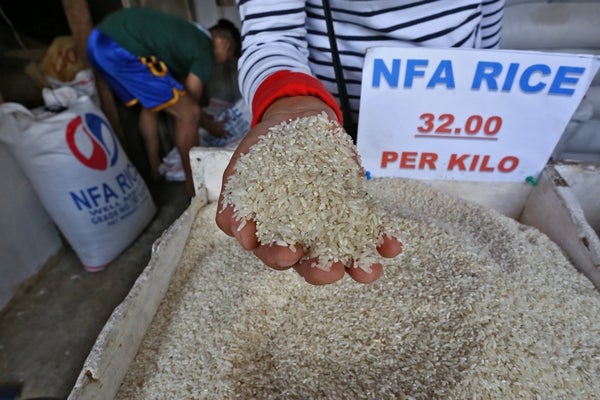 More commercial rice consumers have shifted to NFA rice because of the increasing prices of commercial rice. That is according to a rice retailer in Cebu./cdn file photo

The government should provide programs that will support the agriculture industry in the long term as a way to stabilize the prices of rice and by imposing a cap on rice prices.

Erwin Goc-ong, Cebu Market Vendors Cooperative (CEMVEDCO) president, said this amid reports of Senator Cynthia Villar proposing to put a cap on the prices of commercial rice as a way to address the spiraling rice prices in the market today.

He said the programs supporting farmers that the government could implement would include building new irrigation and for government to protect the shrinking farmlands or agricultural lands from being converted to industrial lands.

He also said that if the government would cap the prices of rice then they should also subsidize the losses of rice traders in selling their product especially that they had to sell their products at a lower price.

He said that the government could not just dictate the price of goods without subsidizing the loss in traders’ income.

According to Goc-ong, the maximum capital incurred in order to sell rice at P40 per kilo should be P38, which covers the buying price of grain and the cost of milling.

“Kung paliton og P23 per kilo ang palay, unya ila nang ipamilling, ang puhonan sa kay P46 per kilo. They have to subsidize the P8 kay di man pwede nga diktaran nila ang presyo nga ingnon nila ang farmers nga P19 ra gyod ang baligya sa palay aron P38 ra gyod ang capital ug mabaligya at P40 (If traders will buy palay at P23 per kilo and had these milled, then their capital would be P46 per kilo. They have to subsidize the P8 per kilo because they could not tell the farmers to sell their palay at P19 per kilo so that the capital for these would only be P38 per kilo and so the traders could sell at P40 per kilo),” Goc-ong said.

Meanwhile, the presence of cheaper NFA rice in the market has lowered the demand for commercial rice, but not the price margin.

In fact, the prices of commercial rice have shoot up to at least P2 per kilo in public markets.

Eddie Ramos, a retailer of commercial and NFA rice in Carbon Public Market, said their suppliers had imposed higher prices for the commercial rice for the past week due to low supply.

He said that most of his customers had resorted to buying the cheaper NFA rice because of the soaring prices of commercial rice.

He said that none of the supplies of NFA rice that he got were infested with bukbok or wood bugs.