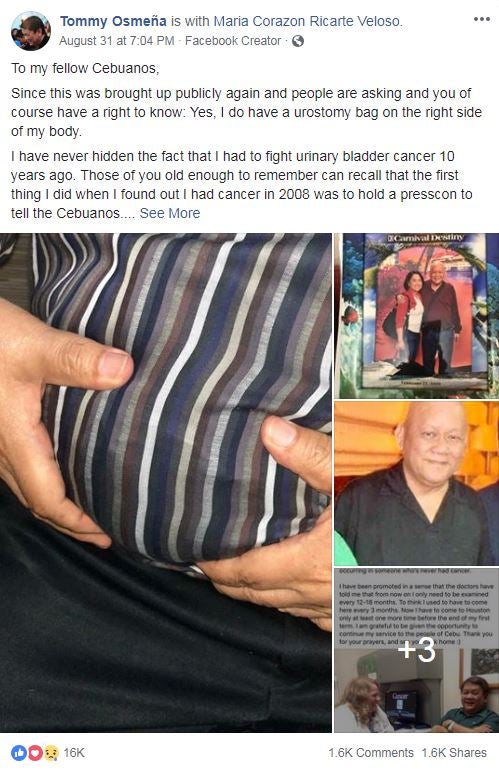 Cebu city—Beleaguered Mayor Tomas Osmeña of Cebu City has taken to social media to respond to the way President Duterte mocked the mayor’s health amid a scathing speech during a visit here last week.

Osmeña, a cancer survivor, wrote on his Facebook post that what he was carrying on the right side of his body was a urostomy bag and not a bag of “shit” as claimed by Mr. Duterte in a speech during the 49th Charter Day anniversary of Mandaue City, Cebu last Aug. 30.

“I have never hidden the fact that I had to fight urinary bladder cancer 10 years ago,” Osmeña wrote on a post addressed to “my fellow Cebuanos.”

He said that while cancer does change one’s life, he would not hesitate to resign as mayor if he would no longer be able to do his job . The message was posted on Aug. 31, a day after President Duterte gave a five-minute rant against him for allegedly accusing Mr. Duterte of being a protector of illegal drugs and for saying that the national government should not interfere with the affairs of Cebu City.

The post had an accompanying photos including a close-up shot of the bag inside his polo shirt and a Feb. 23, 2009 photo of the mayor and his wife Margot.

The photo showed a bald Osmeña, apparently due to his chemotherapy treatment at that time. He also showed a screenshot of his Aug. 9, 2016 post where he announced that there was no sign that the cancer had come back following his second consultation with the Kamat and Siefker-Radtke physicians.

In a speech during the Charter Day anniversary of Mandaue last Thursday, Mr. Duterte gave Osmeña a tongue lashing – which came as a surprise since on Aug. 21, he thanked Osmeña before the League of the Municipalities in the Philippines members for supporting him.

In his speech in Mandaue, the President threatened to slap the mayor including the bag that he was bringing with him. “Gipa- arrange taka kay — nianhe ko kay gusto ko makig … P***** i** tamparuson ta gyud ka, tan-awa. Unya kanang imong tae imong gidala-dala anang plastik sa tiyan (I had a meeting arranged because — I came here because I want to … I will slap you, wait and see. And the shit you are bringing with you inside that plastic bag in your belly,” he said.

He said what was ailing Osmeña was “hubris” or extreme arrogance.

“He is the braggart who has been in politics for a long time, who says something like, ‘Don’t interfere with Cebu because it is ours,’” Mr. Duterte said.

The President continued: “You son of a bitch! If you want to leave the Philippines, drag Cebu along with you in the Pacific.” “Who are you to say that?

As if you own Cebu. By what right? Just because you were a former … President’s son or grandson?”

Mr. Duterte said he wanted to speak to the mayor and slap him for “spreading false stories” that he was a drug protector.

But in his Aug. 31 post, Osmeña said he never hid the fact that he was afflicted with urinary bladder cancer 10 years ago.

“Those of you old enough to remember can recall that the first thing I did when I found out I had cancer in 2008 was to hold a presscon to tell the Cebuanos,” he said.

Because of the cancer, Osmeña said the doctors had to remove my bladder and replace it with an external pouch that collects his urine through a stoma and routs it to another bag that is strapped to his leg.

“Because of sweat the bag’s adhesive sometimes fails causing leaks which is why some of you may notice I change shirts during the day,” he said.

But the mayor said it was not that bad since now, he didn’t have to wake up in the middle of the night to pee.

What irritated him, he added, was just the leaks especially when it happened in the middle of the day.

“They have become a little more frequent lately because of a complex hernia that developed from the surgery that’s gotten worse over the past few years,” the mayor said. “But at least it’s just urine and not feces, which is what some people are asking,” he added.

Osmeña said he was supposed to have his hernia fixed last month but had to postpone it for the fourth time since he had to be in Cebu in the wake of the series of killing in the city and the police’s insistence that “Cebu is safe.”

To prevent rivals from riding on the criticism of the President that he had claimed Cebu as his own, Osmeña posted a video of his response during the Visayas-leg of the Inquirer Town Hall Meeting during the 2016 election coverage dubbed as “Whose country is Cebu.”

The clip showed Osmeña, one of the four panel members, addressing the crowd and saying: “Who owns Cebu? It’s the Cebuanos who own Cebu and I’ll fight to keep it that way.”

Read Next
Husband of the vice mayor of Clarin, Bohol shot dead