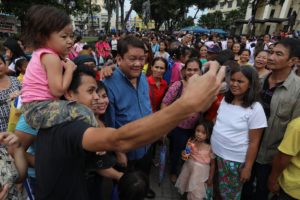 THANKSGIVING: Cebu City Mayor Tomas Osmeña interacts with his supporters before the Thanksgiving Mass at Plaza Sugbu on Sunday. The National Police Commission (Napolcom) says that the mayor may lose his control over local police following the filing of cases against him.
CDN PHOTO/ TONEE DESPOJO

Cebu City Mayor Tomas Osmeña may lose his authority over the police again.

Rogelio Casurao, vice chair and executive of the National Police Commission (Napolcom), on Monday said they were contemplating of taking back the authority of the mayor as its deputized representative.

This after charges were filed against Osmeña at the Office of the Ombudsman for “unlawfully” taking into custody and releasing three suspects who were arrested for purportedly refilling butane canisters with liquefied petroleum gas (LPG) at the T. Padilla Public Market last month.

“Of course, these are adverse reports on Mayor Osmeña. One justification in revoking one’s authority over police is your performance as a local chief executive and if you don’t prove anymore to be effective in preventing crimes,” said Casurao in an interview during the 24th National Crime-Prevention Week culmination at the Police Regional Office in Central Visayas (PRO-7) headquarters.

He said a process, however, has to be followed before Napolcom imposes any sanction.

“We have a process on how we go about this. We don’t want to preempt anything. It has to be complemented with actual validation to support that there is a need to revoke the deputation authorities of local executives,” Casurao said.

Cebu Daily News sent text messages to Osmeña to get his statement on Napolcom’s pronouncement but these remained unanswered.

Last month, the Cebu City Police Office (CCPO) filed cases of obstruction of justice, grave abuse of authority, and conduct unbecoming of a public official against Osmeña for reportedly facilitating the release of three suspects arrested for selling butane canisters refilled with liquefied petroleum gas in violation of Presidential Decree 1865.

In an earlier interview, Osmeña claimed he didn’t facilitate the release of three detainees from the Parian Police Station but the policemen on duty allowed him to take custody of the butane vendors.

He said he “bends the law a little bit for poor people because of mercy.”

He said he just wanted to help people who were trying to make a living by hawking. “They were caught on a Friday and they’re going to be in jail the whole weekend,” he said.

In August 2016, the Napolcom took back Osmeña’s authority over the local police as its deputized representative after the mayor withdrew financial and logistical support to the new policemen assigned at the CCPO.

But Napolcom restored Osmeña’s deputation after over a month after declaring that he wanted to get back his supervisory powers over the local police.

Section 64 of Republic Act 8551 or the Philippine National Police Reform and Reorganization Act of 1998 provides that governors and mayors are automatically deputized as representatives of the Napolcom in their respective jurisdiction.

The Napolcom has the power to revoke it.

At present, Osmeña has been at odds with the police and even accused some of them of having a hand in the recent spate of killings in Metro Cebu. He also threatened to stop providing subsidy for the repairs of city-owned vehicles assigned to the CCPO if the operatives of the Special Weapons and Tactics (SWAT) were not integrated and deployed with the Mobile Patrol Group (MPG) as a crime prevention measure.

Senior Supt. Royina Garma, CCPO director, declined to comment on Napolcom’s pronouncement on the possibility that Osmeña would be stripped of his supervisory powers over the police, saying the issue was not within her scope.

Garma also declined to comment on the relationship between Osmeña and the CCPO.

“For now, wala naman akong rine-request sa City Hall and kung anong binibigay nila na support, okay naman (For now, I have not requested anything from City Hall and whatever support they give, it’s okay),” she said.

Cebu City Vice Mayor Edgar Labella, for his part, hoped Napolcom would not strip Osmeña of his authority over the police since doing so would be counterproductive and would affect the city’s peace and order situation.

“I hope that will not happen since it is counterproductive. Of course (if it will happen), everything will be left to the police. But I don’t think that police operations will be hampered,” said Labella.

“But peace and order is a job not only for the mayor or the police but for everyone,” he added. /with Morexette Marie B. Erram

Read Next
Police say they have new witnesses in Blanco slay