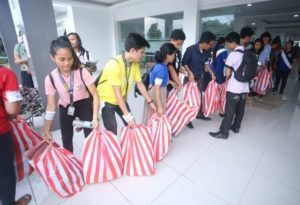 But on Saturday, the marketing student of the University of Southern Philippines Foundation (USPF) decided to lend a helping hand to the thousands of landslide victims in Naga City by helping repack relief goods at the Visayas Disaster Response Center (VDRC) in Mandaue City.

“Nindot siya nga experience kay gitagaan mi og chance makatabang (It is a nice experience because we were given a chance to help),” Molit said.

Molit was among 260 volunteers consisting of students, army reservists and members of the Philippine Army at the VDRC compound on Saturday.

Private Ellen Aranas of the 53rd engineering brigade of the Philippine Army said helping with the repacking of goods is already a form of service.

“Small thing lang siya pero malaki ang maidudulot especially sa mga nasalanta ng landslide at bagyo (It maybe a small thing but it has a big impact on victims of landslides and typhoons).

Through this we can send our sincere service,” she said

With extra helping hands, Irish Flor Yaranon, VDRC chief administrative officer of the Department of Social Welfare and Development (DSWD), said they were able to maintain their mandated buffer stock of at least 50,000 boxes of relief goods at their warehouse.

According to Yaranon, they started repacking a week before typhoon Ompong hit the country last Sept. 13 and left at least 82 persons dead and thousands homeless, mostly in Northern Luzon.

Last Thursday (Sept. 20), personnel from DSWD-7 distributed family food packs to the around 500 families affected by the landslide in Naga.

“As a response to the immediate needs of the affected families, we provided support to the city government of Naga as part of the concerted effort of the government to provide augmentation,” DSWD-7 Directot Ma. Evelyn Macapobre said.

The relief goods contain six kilos of rice, eight canned goods and six sachets of coffee which is good for two days for a family of five.

Yesterday, Yaronon said they have given each family three boxes of goods which could last for a week.

Read Next
A day of horror & unspeakable pain