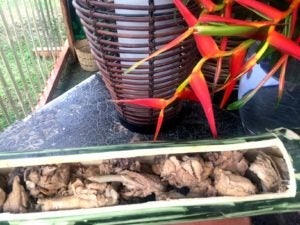 LAST week, I had the privilege to judge in a cook fest in the town of Argao. A happy confluence of passion and common interest to preserve old recipes, the event was called “Dapugan sa Panahon.” The word “dapog” is a Cebuano word that means “hearth.” It is a place where cooking is done and is considered the heart of a home. “Dapugan” later became “abuhan,” referring to a fireplace or kitchen where there is “abo” (ashes) from firewood.

What is remarkable about this cook fest is that the participants had to submit a story for every dish entry. Doing so ensured the authenticity of the recipes, which are all native to Argao. Moreover, the participants were
not allowed to include bouillon cubes or MSG and had to use firewood instead of LPG to cook the dishes.

Each group had to present a soup, a viand, a vegetable dish and dessert. An added dish was the corn grits. For the soup, there was Kaldiyo (from the Spanish Cardillo, I presume), a simple soup of kamunggay with beaten egg; Utan Bisaya; Linarang nga Isda; and squash soup. The rest were variations of the three mentioned.

For the main dish, the participants used chicken, pork and fish. One group presented Adobong Manok sa Kawayan which was redolent of tanglad (lemon grass). There was Humba with fried Saba Bananas.

Another group made Tinolang Manok, while the fourth group made Sinuglaw, a combination of sinugbang baboy and kinilaw nga isda.

The Tam-is portion came up with two versions of Bukhayo, Tam-is nga saging Saba and Putokayo which was puto maya with bukhayo filling. The sweets used ingredients which are plentiful in Cebu: coconut, bananas and glutinous rice. One bukhayo recipe used a leaf that smelled like anise.

Cooked corn grits were the accompaniment to the main dishes, vegetables and soup. These varied with the method of cooking. Binuyok nga Mais meant the corn grits were added to boiling water. Some corn grits were cooked together with the water. Two participants presented Sinanduloy or corn grits cooked with Camote or sweet potato. One used yellow Camote while the other one used purple Camote. This harks back to the old days, adding camote to corn grits is a way of extending the supply of corn between harvests. During times of drought, root crops like camote, gabi and cassava were corn or rice substitutes or supplements.

The “Dapugan sa Panahon” cook fest brought to light stories of the childhood of the participants. It was a time when life was simple and food was something you helped grow, harvest and cook. The stories highlighted the
old ways of a people whose lives were marked by the tolling of the bells of the church of San Miguel de Arcangel whose feast Argao is honoring during this week.