How Pancho Magno relates to Modi in ‘Victor Magtanggol’ 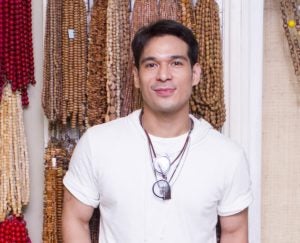 AMONG the more prominent characters in GMA Telebabad’s action-fantasy series, “Victor Magtanggol” is the god of wrath, Modi portrayed by actor Pancho Magno.

Magno, who has done several teleseryes for the Kapuso Network, told members of Cebu’s Entertainment Group in a recent press conference that among the challenges in portraying Modi is sticking to a strict diet. “Kasi nga ‘yung role namin we have to be fit,” he said.

Another challenge is doing the tough action scenes while wearing heavy costume.

The actor, however, stressed that he is happy to be part of the series.

And although the series is based on Norse Mythology, Magno believes that Filipino viewers can still relate to the story and the characters.

Considering that Modi is a villain, is there a trait of his that is similar to Magno’s?

Modi is the younger brother of Magni, portrayed in the series by Miguel Faustmann, the keeper of the Mjolnir (hammer) on Earth. The two are sons of the god of thunder, Thor.

Modi wants to get the Mjolnir for himself and ends up killing his own brother in the process.

The Mjolnir is the source of power and strength of Hammerman, the character portrayed by the series’ lead actor Alden Richards.