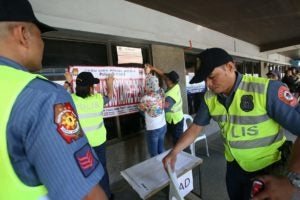 As of 11 a.m., no one has visited the Commission on Elections (Comelec) offices in Cebu City to file their Certificates of Candidacy (COC).

But north district Election Officer Marchel Sarno said they are prepared to accommodate anyone who would visit their office to file their COCs.

Filing of COCs is schedule from 8 a.m. to 5 p.m. starting today (October 11) and until Wednesday (October 17). Comelec offices will be closed during the weekend.

Even before the Cebu City Comelec offices opened at 8 a.m. today, policemen from the Waterfront Police Station were already deployed in the area.

They set up a police assistance desk there to accommodate peace and order related concerns.

Garma and Tumulak later on spoke with Sarno.

“We are thankful that the police are here to assist us,” said Sarno in an interview after their closed-door meeting.