Niños way ahead in points tally 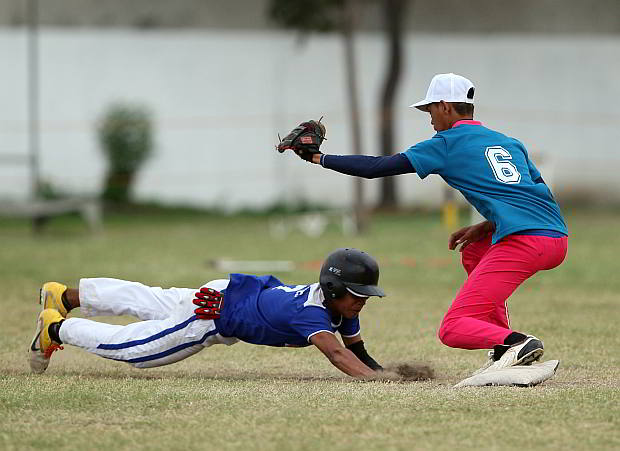 Boy Tangeres of Negros Oriental dives for a steal on the second base against Cebu Province’s Joseph Magdadaro during their semifinal match in the baseball event of the Central Visayas Athletic Association yesterday. (CDN PHOTO/TONEE DESPOJO)

After leading the medal tally for days, its no surprise that the Cebu City Niños are also lording it over the Overall General Championship Points (OGCP) standings after three days of the Central Visayas Regional Athletic Association (CVIRAA) meet.

The points system is used to determine the 17-division meet’s overall champion.

The Niños have accumulated a total of 234 points from their elementary and secondary squads. Cebu City’s elementary team has 106 points while its secondary division hauled 128 at the conclusion of the medal-rich swimming competition, arnis, taekwondo, volleyball and table tennis.

The Niños hauled 120 points in swimming after sweeping both the elementary and secondary classes, got 49 points from their taekwondo jins and 35 points from volleyball. Cebu City’s arnisadors delivered 30 points.

The Niños taekwondo jins won 15 gold medals, five from their elementary division and 10 from their secondary players.

FOOTBALL
Cebu City likewise advanced to the finals in secondary and elementary football and secondary basketball.