Drug seller arrested inside a pension house in Colon 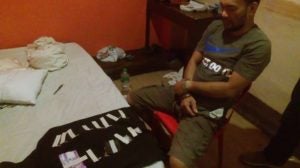 A 40-year-old resident of Barangay Carreta, Cebu City was arrested in a buy-bust operation inside a pension house along Colon Street on Sunday evening (October 22).

The arrested person was identified as Joseph Yap, who was caught in possession of illegal drugs with an estimated worth of P125,000.

Senior Insp. Joemar Pomarejos of the drug enforcement unit of the Waterfront police station said that Yap conducted most of his transactions in a pension house.

The arrested is now temporarily detained at the jail facility of the police station.

Read Next
Pagasa to public: Amihan near, but be ready for possible November-December typhoons