GUN IN MALUBOG TRACED TO BJMP 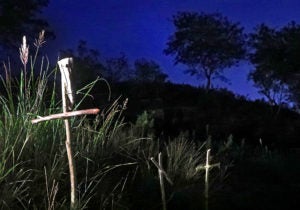 SILENT REMINDERS. Wooden crosses serve as silent reminders of the gruesome murders that took place in this grassy portion of Barangay Malubog in Cebu City. A shoe, reportedly owned by one of the victims, is mounted on one of the crosses./CDN PHOTO/ TONEE DESPOJO

The theory floated by the police that drug syndicates are behind the killing of five persons suspected to be involved in the trade of illegal drugs in Barangay Malubog, Cebu City, a month ago got a major boost yesterday.

This after one of the four firearms recovered at the crime scene was traced to the Bureau of Jail Management and Penology in Central Visayas (BJMP-7) and which was believed to have been stolen by the suspects who ambushed and killed three drug suspects on their way to a hearing onboard a BJMP vehicle in Talisay City three months ago.

The suspects in the Talisay ambush spared the lives of two BJMP escorts and the van driver but confiscated their service firearms.

One of the missing firearms was reportedly found beside the body of one of those killed in Malubog as shown by its serial number.

Senior Supt. Royina Garma, the director of Cebu City Police Office (CCPO), told reporters yesterday that the BJMP confirmed that the recovered gun belonged to them.

(We asked the BJMP if they have a similar gun, and they claimed that it belongs to them.)

But as to who owned the firearm, Garma said that they are still asking the Firearms and Explosives Division (FED) to identify the owner.

(The FED has the record. So before we can conclude who the owner is and if it really belongs to BJMP, we need the report from FED.)

Garma, however, refused to reveal the model of the firearm which she said belonged to the BJMP.

CCPO investigators already submitted the report about the four firearms to the FED Wednesday last week.

But since Thursday and Friday were holidays, the CCPO is expecting to receive the report anytime this week.

The Malubog murders happened at around 3 a.m. of October 4 in Sitio Kan-irag, Barangay Malubog, a mountain village which is 12 kilometers from Cebu City.

Sharmaine Puran and habal-habal (motorcycle-for-hire) driver Antonio Belande survived the attack by rolling through the steep terrain and hiding among the bushes until investigators and the media arrived.

Aside from the five bodies, also recovered from the crime scene were three pieces of .45 caliber and a 9mm pistol.

Malubog victims might have a hand in the ambush of Talisay City Jail inmates more than three months ago.

Last July 20, three Talisay City Jail inmates were ambushed and killed while on board the service vehicle of the BJMP-7.

While the two jail guards who escorted the inmates and the driver of the BJMP vehicle were not harmed, the firearms of the jail officers were confiscated by the suspects.

Garma said that it is highly possible that those who were killed in Malubog were the same persons behind the ambush in Barangay Maghaway, Talisay City.

But she cautioned that nothing is final yet.

Read Next
Candidates scrambling to get Duterte’s backing