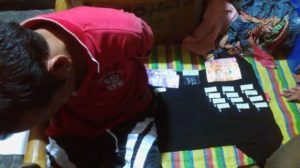 Tired of doing hard labor as a pedicab driver, Noel Espinosa shifted to peddling drugs with hopes of earning more.

But his illegal drugs business did not last long.

Espinosa, 40, was jailed after he was arrested by personnel from the Drug Enforcement Unit of the San Nicolas police station led by Chief Insp. Allan Rosario at around 6 p.m. on Thursday (November 8).

Read Next
NBI-7 has a new director