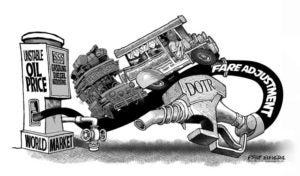 Any plans by government to implement an automated fare adjustment rate system should ultimately benefit the commuter and not be one-sided in favor of transport operators.

The plan was floated by the regional Land Transportation Franchising and Regulatory Board (LTFRB) likely in response to the recent fare adjustment for Luzon-based passenger jeepneys.

Identified as a proposal by Transport Secretary Arturo Tugade, the system will spare transport groups the inconvenience of applying for fare rate increases by automatically adjusting fares by bracket depending on the fuel price increase to be imposed by the oil firms.

It is also likely that the Department of Transportation (DOTr) will assure the riding public that the system will be transparent and identify the rate of fare increase by virtue of the fare rate brackets to ensure their support for it.

At this point, we also hope that the government also sets up a similar fuel price increase rate adjustment system for oil firms so that consumers won’t be caught flatfooted nor exploited by both them and the transport operators.

Understand of course that this is but Tugade’s proposal and this may undergo congressional scrutiny if enough public noise is generated for its deliberation.

For starters, finalizing the fare adjustment brackets may be comparable to classifying typhoons rather than prevailing market prices.

A fare bracket classification system may also mean uniform rates across the country which will undeniably favor the mass transport operators who form part of, even if substantial, the national transport equation.

There will also be questions of how this system will be implemented on the ground.

There will be instances in which jeepney drivers will feud with their passengers and vice versa over fares regardless of whether or not they were informed about any increase or decrease in fares.

A mechanism to report abuses will be set up and how effective the LTFRB is in addressing them will determine whether this system is workable or not.

Again, how will this benefit the end users who are always burdened with the cost of both fares and fuel prices?

A similar rate adjustment system over oil companies may be seen as a form of price control but these companies, regardless of their repeated blanket denials, remain the constant beneficiaries of global fluctuations in fuel prices.

Even with a deregulated environment, the oil companies must do more to shoulder their share of the burden on the consumers.

Read Next
Christmas is in the air, prices go up as well