Christmas is in the air, prices go up as well 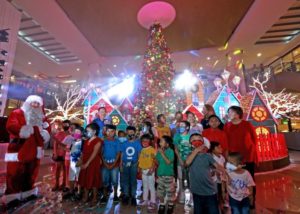 HAPPY KIDS: Christmas comes early for the Kythe Foundation children who suffer from cancer and other chronic illnesses after they receive chocolates from Santa Claus during the Christmas lighting event at SM City Cebu on Nov. 8, 2018. Marissa Fernan (far right), vice president of SM Prime Holdings, Inc., stands with the Kythe children-beneficiaries of SM City Cebu’s Share a Bear this Christmas.

As early as now, Susana Navarro, 52, is already planning on what to prepare for Noche Buena on Christmas Eve on December 24, in celebration for the birth of Jesus Christ on December 25.

Navarro used to have in her menu spaghetti, macaroni salad and if fortunate enough, a ham.

For her and her five children, this kind of preparation for Noche Buena is a feast.

But with prices of Noche Buena fare rising, Navarro will have none of these delectable treats common in many Filipino households on Christmas Eve.

This year, Navarro is thinking of just preparing Filipino desserts or “kakanin” such as biko and gulaman due to lack of budget.

“I’ll just share what I would prepare with our neighbors and my relatives, and maybe, they could also share with me what they will prepare for Noche Buena,” Navarro told Cebu Daily News in Cebuano.

Aside from this, the Department of Trade and Industry in Central Visayas (DTI-7) has also announced that majority of the products – from canned goods to cured meat – have also increased in prices compared to last year.

Navarro, a solo parent raising her children by selling snacks and refreshments beside the street after her husband died six years ago, said they will just have to live within their means.

“What is important is that we could share something during the Noche Buena. It doesn’t matter if the food is luxurious or not,” she added. 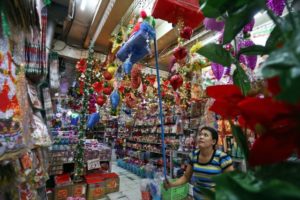 HALLOWEEN ITEMS OUT, CHRISTMAS DECORS IN: Stores in downtown Cebu City have removed their Halloween items and replaced them with Christmas decor as December draws near.

Dinah Gladys Oro, DTI-7’s senior trade and industry development specialist, told CDN that there were around 215 Noche Buena products of varying kinds from competing brands that were included in their monitoring this year.

Majority of these products have increased in prices, due to the high cost of raw materials and the weakening of the peso, she revealed.

“Especially those products with imported ingredients, since the value of the peso has declined, the cost of raw materials has also increased,” Oro added.

For instance, Oro said that several brands of ham have increased their price by up to three percent.

She said that a kilogram of a certain variant of ham, which was sold at P525 last year, is sold at P539 this year, or an increase of P14.

But one brand of ham has also cut its price by up to P6 per kilogram, Oro said.

The price of fruit cocktails, an ingredient in making fruit salad, has also increased, ranging from P2.25 to P10.75 per can, depending on their variants and sizes.

Almost all brands of spaghetti pasta, however, have not shown any changes in price, except for one brand, which has increased its price by P0.25 to P3.20 per 175-gram pack and 400g pack, respectively.

There are so far no movement in the prices of Queso de Bola, another Nocle Buena staple, and macaroni pasta, according to Oro.
Oro said the DTI has released as early as October 13 the suggested retail prices (SRP) for Noche Buena products.

“(During our inspection) we have not seen any violators of our SRP especially that the stocks being sold in the market right now are still old stocks. Maybe by the third or fourth week of November, the rise on the price for Noche Buena products can already be felt by the consumers,” she added.

Oro said that those who will violate the SRP and who will be caught selling overpriced products, will receive a show-cause-order from DTI.

The erring establishment will then be required to answer it in writing.

“The usual procedure is that we issue show-cause-order, while the establishment will be ordered to recall the items and adjust its price,” Oro explained.

If the establishment will continue to violate the SRP, Oro said they can be fined, with amounts ranging from P50,000 to P300,000.