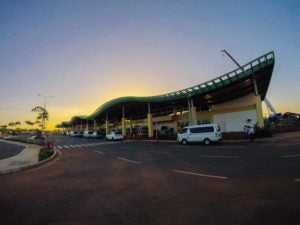 The recent opening of the Bohol-Panglao International Airport is expected to bring in more tourists to the province of
Bohol./FROM DOTR’s FB PAGE

TOURISM stakeholders in Cebu see the opening of the new Bohol-Panglao International Airport (BPIA) in Bohol as an opportunity for growth and not as competition.

While there are worries that the number of tourists entering Cebu through the Mactan Cebu International Airport (MCIA) may be affected, the Department of Tourism in Central Visayas (DOT-7) does not expect so.

DOT-7 Regional Director Shalimar Tamano said in a phone interview that having two gateways in a region, aiming to attract tourists like Central Visayas, would, in fact, help to bring in more visitors as they would now have options in visiting the region.

Aside from having the chance to choose from two gateways, he said, having two airports would give tourists more options for flights from their location to both Bohol and Cebu and vice-versa.

Dubbed as the “Green Gateway to the World,” as it features environmentally sustainable practices and green technologies, the BPIA formally opened and started operations last November 27.

The P8.9-billion airport is also considered as the country’s first “eco-airport” and is designed to accommodate two million passengers annually.

Tamano admitted that he had heard concerns from stakeholders and officials in Cebu that the BPIA would affect the tourism industry in Cebu.

But he said he believed otherwise.

“They think that Cebu’s share of the pie will become smaller, but I honestly don’t think so. What will happen is the pie will just get bigger,” he said.

Looking at the bigger picture, Tamano said that having two airports would also help improve business and the economy of the region as a whole.

For example, he said, businesses like sea vessels that connect the different islands of the region could expect more passengers.

With two new airports, the provinces of Cebu and Bohol are expected to help improve the economies of the other provinces in Central Visyas like Negros Oriental and Siquijor by bringing in more tourists.

“It will complement Cebu’s tourism. Cebu and Bohol have always been partners in tourism. They complement each other. Both have unique selling propositions,” he said.

Asked if he thinks this will affect the MCIA in terms of numbers of tourism arrivals, Costas said this, however, would remain to be seen.

Other stakeholders think though that the new airport will really affect Cebu’s numbers.

Hotels, Resorts, and Restaurants Association of Cebu (HRRAC) President Carlo Anton Suarez said that though that Cebu would be able to pull through as it has its own market.

“As a business operator, I have a feeling that it will affect the tourist arrivals in Cebu. Bohol has its tourism destinations like Cebu.

But now, the option to go directly to see the Chocolate Hills will be more direct,” Suarez said.

“But I also know that Cebu is an established tourist destination already, so we have a stable arrival market,” he added.

Suarez is also the general manager of Cebu Grand Hotel.

Meanwhile, DOT-7’s Tamano agrees that Cebu will continue to hold on to its stable market.

He said that for one, business travelers would still pick Cebu as a gateway due to its frequency of flights where people could just come in during the morning and fly out at night.

Read Next
WINNING IN PENANG