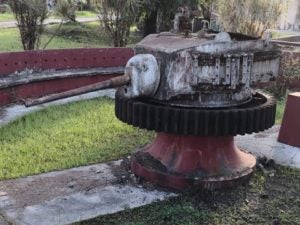 Something that appears to be a U.S. M5A1 Stuart Light tank is now covered in mud at the Dagusungan River in Medellin town. The tank’s turret was recovered years back and is now on display at the Bogo-Medellin Milling Company, Inc. (Bomedco) plaza.
/Contribued photo: Municipality of Medellin Facebook page

Japanese tora-tora fighter planes hovered in the skies of northern Cebu during World War II (WWII) as US and Japanese soldiers engaged in a gun battle on land in the towns beneath.

In the town of Medellin, the war drove many residents into hiding — seeking refuge in caves and nearby islands.

The memories of WWII all come from stories told by war veterans and other elders, said Medellin Municipal Planning and Development Officer Giles Anthony Villamor.

Except for the stories told over and over, there has yet been no clear proof that an active war existed in the northern town.

However something from that era, found submerged in the brackish waters of Medellin’s Dagusungan River, is about to change all that.

Town officials are poised to extract a WWII army tank from the river so that it can be displayed in the town’s docking site.

Villamor said that the US-owned tank was crossing Dagusungan bridge during WWII when it was bombarded by Japanese troops causing the tank to fall into the water.

Over time, the battle tank has slowly been covered in mud.

“We are trying to extract the tank for educational purposes. We have a rich history in Medellin during the World War II that we wanted to teach to our children,” Villamor told Cebu Daily News in an interview.

The recovery of the vintage tank is also expected to boost local tourism. Villamor recalled that there had been several attempts, from the late 70s up to the 80s, to salvage the tank; but efforts failed due to the lack of expertise and equipment needed to go about the process of recovery.

The Bogo-Medellin Milling Company, Inc., one of the groups which tried to extract the tank, only managed to recover the tank’s turret. The turret is now on display in the company’s plaza located about two kilometers from the Dagusungan River.

In 2016, Medellin officials saw a ray of hope when personnel from the 53rd Engineering Brigade moved into town to occupy a 15-hectare lot donated as an army reservation camp during the Commonwealth period.

There are even better hopes of recovering the war tank now as town officials finally decided to tap the brigade for help to turn their dream into reality.

Early on Thursday, December 6, a search team of military personnel and town representatives found the tank’s position under the river at the side of Barangay Poblacion.

The search team could only do an hour’s work as the water level in the area began to rise.

But the initial diggings were enough to give officials a glimpse of the submerged tank.

The diggings exposed a portion of its top cover that used to hold the tank’s turret.

Its serial number showed that the tank was US-owned. It also appeared similar to photos of a US M5A1 Stuart Light tank which Villamor found on the Internet during his research.

Villamor explained that before the tank’s actual extraction from the waters, they will have to make a sketch of its exact position for guidance.

He sought the help of Cebuano historian and head curator of the University of San Carlos (USC) museum, Jobers Bersales, on how to ensure that the old battle tank will be kept intact during the process.

Villamor said that the extraction may have to wait till next year as Medellin still had to prepare contingency plans to prevent a possible oil spill in case the tank still contained gasoline or oil.

Villamor added that town officials also needed to set aside an amount from the 2019 budget to cover the cost of the extraction which will include fuel expenses for the heavy equipment to be used.

According to Villamor, they are looking at the possibility of partnering with the U.S. Government — the original owner of the submerged tank; while they will also consult the Department of Public Works and Highways in Central Visayas (DPWH-7) on how to protect the structural integrity of the Dagusungan bridge during the extraction.

On Facebook, Villamor posted a picture of the US army tank that appeared similar to that which remained in water.

“Gi excavate na man na sa una … wa gitiwas kay lawom. Mayta makuha nana (They began to excavate that before but did not finish the work because it was so deep down. I hope it will finally be recovered),” said May Susi Florita.

Villamor said that as soon as the tank’s extraction is completed, they will ask the Bogo-Medellin Mining Company to allow them possession of the turret so that it can be attached back to the tank.

Another option would be to come up with a replica of the turret to complete the war tank before its display.

“We are doing all that we could because this is part of our history. Part of the life of our people during World War II,” Villamor said.