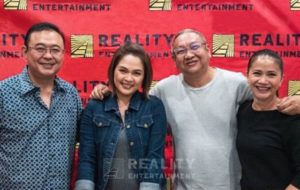 JUDY Ann Santos-Agoncillo is all set for 2019.

Santos-Agoncillo announced the news on her Instagram and shared photos during the signing of contract with acclaimed director Erik Matti.

“Exciting projects ahead for 2019,” she captioned the photos. Santos-Agoncillo’s last big screen project was this year’s “Ang Dalawang Mrs. Reyes” opposite Angelica Panganiban.

“Among movies produced by Reality Entertainment were “On The Job,” “Honor Thy Father,” “Seklusyon,” “BuyBust,” “On The Job 2,” “Resureksyon,” “Kubot: The Aswang Chronicles 2,” and “Kung Fu Divas.”