CEBU CITY, Philippines – By looking at the damage caused by a head on collision accident between a mini bus and a sports utility vehicle, one would expect the worse.

But the accident that happened past noon on Wednesday, February 13, 2019, at the northbound lane of the Cebu South Coastal Road in Talisay City left at least 10 individuals with just minor injuries.

Bernard Bacus, one of the Emergency Medical Services (EMS) personnel from the Talisay City Government who responded to the incident, told Cebu Daily News Digital that the 10 passengers of the bus received minor injuries, mostly on their upper torsos, and are now confined in a nearby public hospital.

Bacus also said the driver of the SUV was safe from harm, even if the impact caused by the collision pinned his left leg.

“But they are all safe from harm. Including the driver of the SUV,” said Bacus.

“The driver of the SUV was immediately rushed to the hospital after he was extracted out of his car. His left leg was pinned down but nevertheless, he only sustained minor injuries like lacerations (scars) on one side of his head, and multiple abrasions mostly on his arms,” he added. 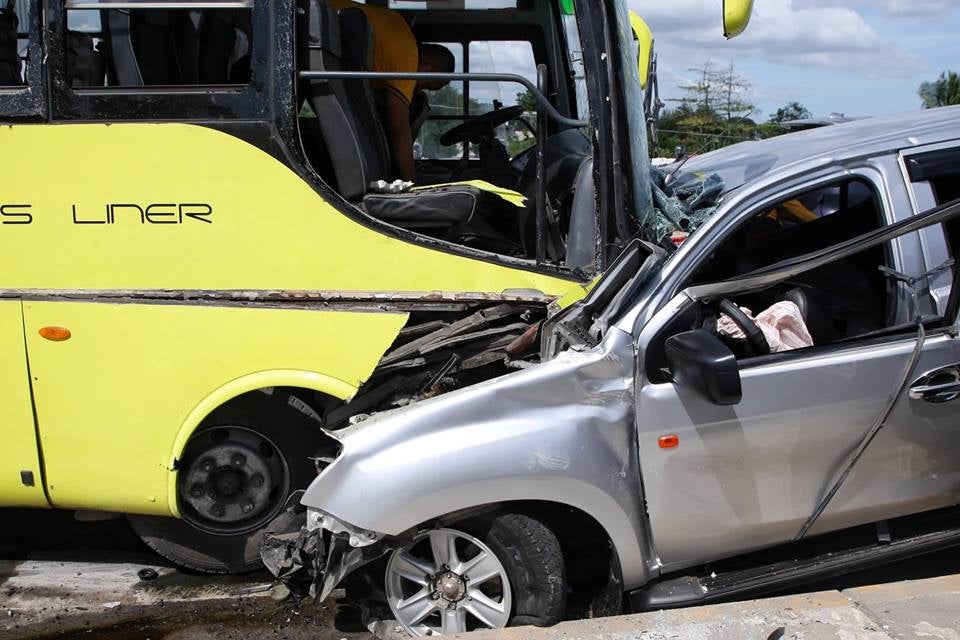 A passenger bus and a sports utility vehicle collided head on along the northbound lane of the Cebu South Coastal Road fronting the Talisay City Hall past noon on Wednesday, February 13, 2019. | CDN Digital Photo by Tonee Despojo

PO1 Euphemio Padillos Jr. said in a separate phone interview that the SUV driven by Gonzales was traversing the southbound lane but crossed through a space in the center island of the CSCR a few meters away from Mananga Bridge and on to the northbound lane, where it rammed into an oncoming mini bus.

He added that both vehicles were running at high speed, which explained the damage caused by the impact.

Padillos said they are waiting for any feedback from both parties to determine if either of them will file a case against the other. /bmjo

Read Next
PO3 marries SPO1: A story of love and public service