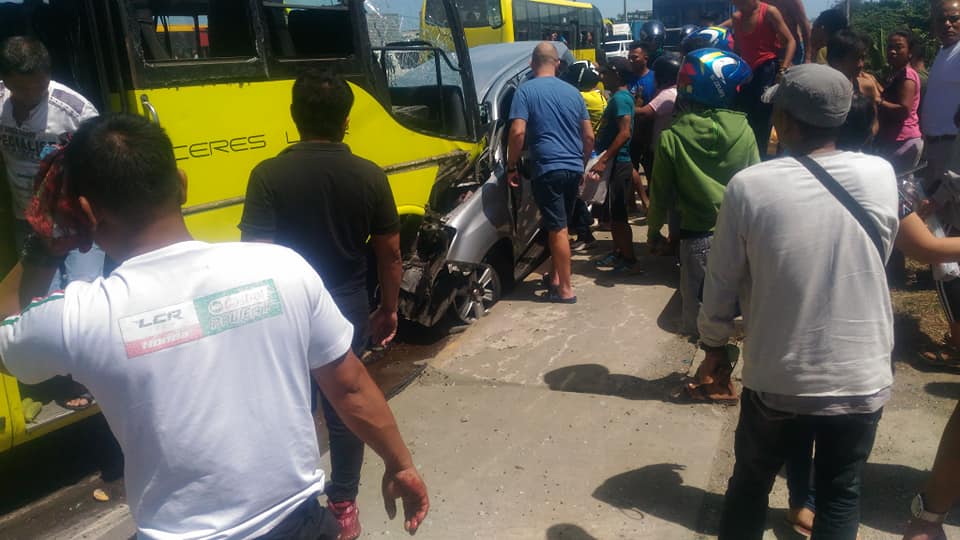 People try to help the driver of a SUV that rammed into a mini bus at the Cebu South Coastal Road in Talisay City.  Contributed photo | Mark Ruben Abacajan

Talisay City, Cebu – A sports utility vehicle and a mini bus collided head on along the northbound lane of the Cebu South Coastal Road (CSCR) in Talisay City past 12 noon on Wednesday, February 13, 2019.

The bus was reportedly coming from Dalaguete town southern Cebu and was traversing the northbound lane when an Isuzu mu-X SUV, based on accounts of witnesses in the accident site, counterflowed from the southbound lane and rammed into the oncoming bus.

No one reportedly died from the accident but the driver of the SUV was immediately rushed to the hospital.

Photos from netizen Mark Ruben Abacajan also showed some of the bus passengers with minor injuries.

Police are still in the area to determine the exact cause of the accident as of press time.

The accident caused heavy traffic in the southbound lane of the CSCR. /bmjo

Read Next
Consolacion cops warn bank robbers: Not in our town