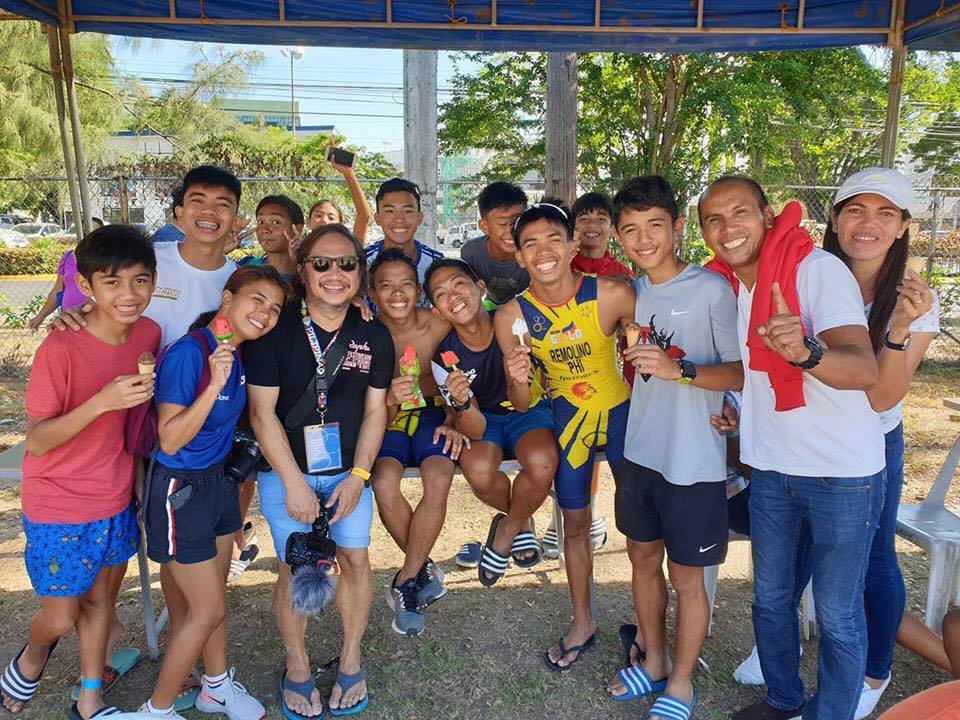 Andrew Kim Remolino (in a trisuit) with the rest of the members of the Talisay Luigi Triathlon Group (TLTG) Go for Gold, and coach Roland “Andoy” Remolino (extreme right). | Contributed Photo

CEBU CITY, Philippines – How much would you be willing to give up for a chance to represent the Philippines?

While his Paref Springdale classmates were receiving their high school diploma last Saturday, April 27, 2019, Remolino was preparing for the Subic Bay International Triathlon 2019 in Subic, one of two qualifying races for the 30th Southeast Asian Games which the Philippines will be hosting from November 30, 2019 to December 10, 2019.

Although he missed out on an educational milestone, the 19-year-old had something to celebrate about as he was the first Filipino to cross the finish line in the Open Elite category held Sunday, April 28, 2019.

But was the decision to miss graduationAnd, it was well worth it because the very promising young Cebuano who hails from the City of Talisay was the first Filipino to cross the finish line after clocking one hour, 54 minutes and 49 seconds (1:54:49).

With that strong finish, Remolino is now seeded first in the battle to represent the Philippines in the triathlon competition of the 2019 SEA Games. He just needs another top 2 finish in the next qualifier, which will be held in Korea in June, to secure his SEA Games slot.

So was the decision to miss graduation worth it?

(For me yes because me and my father were able to get our target which is to rank for the SEAG.)

Either the top 2 or 4 Filipino triathletes will get to represent the Philippines in the upcoming SEA Games.

Despite the strong finish in his first open elite category in an international competition, Remolino still thinks he can do more.

(Of course, I’m very happy but still unsatisfied because my performance is still lacking.)

“I am still very far from other countries,” said the younger Remolino, who has been training for this event for six months since he switched his focus from the sprint distance to the standard distance.