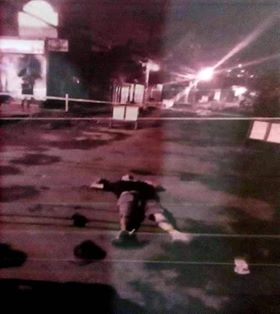 The body of the man who was shot dead along Bonifacio Street corner Jakosalem Street, Barangay Parian, Cebu City, at around 3 a.m. Sept. 13, 2019. |Photo courtesy of the Parian Police

CEBU CITY, Philippines — A man was shot dead after a heated argument with the shooter at round 3 a.m.  this morning, September 13, in Barangay Parian, Cebu City.

Police said the victim,  identified as Alexander Lastimoso, was sleeping on the road along Bonifacio Street corner Jakosalem Street, when shot by a certain a “Em-em” using a gun of still unknown caliber. Prior to the killing, the two allegedly had a heated argument.

Police Captain Armando Labora, Parian police chief, said their initial investigation showed that the victim was often seen in the area but was not a resident there, hence they also still have to verify if he was really Alexander Lastimoso as he had introduced himself to the people in the area.

No one could also step forward to give the description of the suspect who fled after the incident. As of writing, the investigators were still conducting follow-up operation to trace the suspect and to also find the family of the victim who could identify his remains.

Labora said they were calling on the public, especially those who are missing a family member, to visit their office or the Saint Francis Funeral Homes in N. Bacalso Avenue, Cebu City, where the body of Lastimoso is currently laid.

The victim was believed to be 25 to 30 years old, wearing a black shirt, black slippers, black bullcap, and blue shorts with no body tattoos reported when he was found./elb