Bike ban at Mactan-Cebu bridges lifted, but with conditions A biker participating in the IronMan race passes through the Marcelo Fernan Bridge. | CDN file

CEBU CITY, Philippines — The Mactan Cebu Bridge Management Board has reconsidered its earlier decision to ban bicycles from plying the two Mactan-Mandaue bridges.

Lawyer Rory Jon Sepulveda, a legal consultant at the Capitol, confirmed to CDN Digital that the bridge board has decided to “lift the total ban” of bicycles in the Sergio Osmeña and Marcelo Fernan Bridges but some restrictions will still be imposed.

The MCBMB has convened in a special meeting at noon on Friday, September 13, amid the clamor from bike enthusiasts and those who depend on bike for their home to work transport. 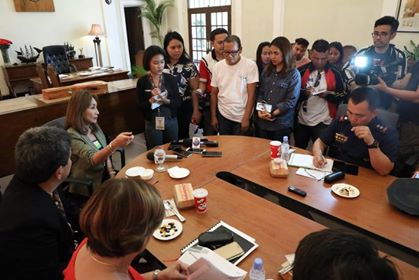 Cebu Gov. Gwen Garcia speaks to reporter after the meeting of the Cebu Mactan Bridge Management Board on Sept. 13, 2019 where she announces the lifting of the bike ban at the two Mandaue-Mactan bridge with conditions. |Capitol PIO/TONEE DESPOJO

Sepulveda, however, said that there are still restrictions that will be implemented despite the new development.

“Cyclists are allowed to cross both bridges provided that they use the pedestrian pathways and to walk with their bikes,” Sepulveda said in a message reply to CDN Digital.

At the Sergio Osmeña Bridge, pedestrians, including cyclists, will have to follow a one way flow in crossing the bridge. Here, they will be using the pathway on their left so that the will be facing the traffic flow of vehicles. The Sergio Osmeña Bridge or the old bridge connects  Barangay Looc in Mandaue City and Pajo in Lapu-Lapu City. Cebu Gov. Gwen Garcia presides over a meeting with members of the Mactan Cebu Bridge Management Board on Sept. 13, 2019 where it is decided to lift the bike ban at the two Mactan-Mandaue bridges with condition. |Capitol PIO Photo/ TONEE DESPOJO

The MCBMB earlier agreed during their meeting last Tuesday, September 10, that bicycles will be banned from crossing the bridge as part of the measures to counter the recent cases of suicides at the bridges.

The MCBMB is chaired by Governor Gwendolyn Garcia. Its members include the mayors of the cities of Cebu, Lapu-Lapu, and Mandaue and the town of Cordova; regional directors of the Department of Public Works and Highways (DPWH-7), and Land Transportation Office (LTO-7); and the chairman of the Regional Development Council (RDC-7) and two private sector representatives.

LTO-7 Regional Director Victor Caindec said the measure to ban bikes is also to promote road safety in the bridge.

The proposed ban on bikes gas drawn flak among cyclists considering that most of those who bike in the bridge are blue collar workers. /elb