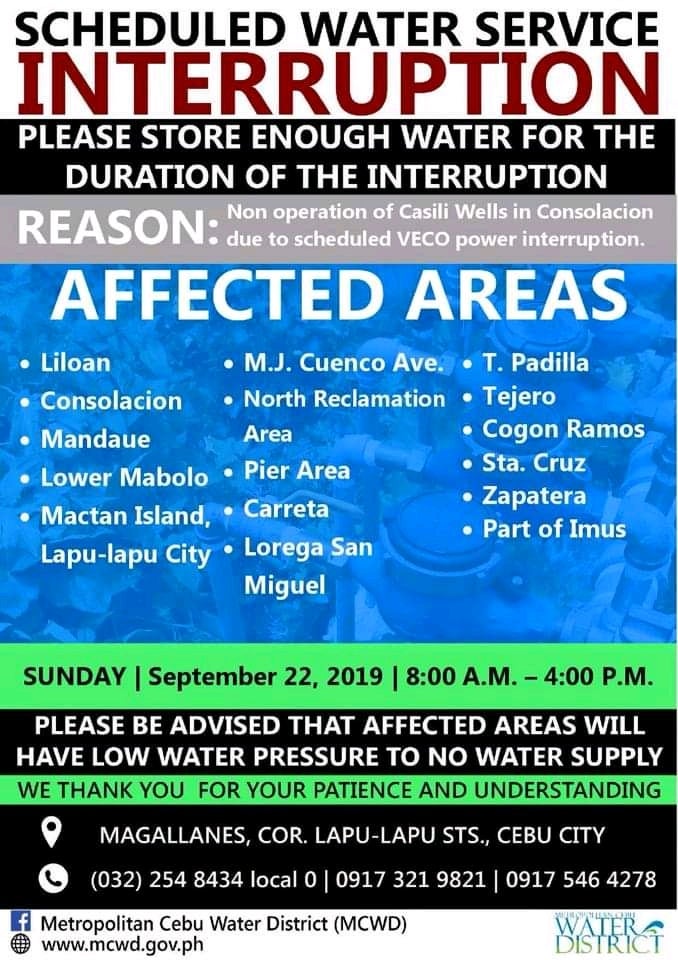 CEBU CITY, Philippines — Eight hours without water is a “disaster.”

This was the reaction of Nagiel Bañacia, head of the Lapu-Lapu City Disaster Risk Reduction and Management Office (LCDRRMO), to the announcement that parts of Metro Cebu, including Lapu-Lapu City ,will experience water service interruption for at least eight hours on Sunday, September 22.

Bañacia said the Metropolitan Cebu Water District (MCWD) should not allow water consumers to experience such a disaster.

He is urging the water district to implement a contingency plan that would lessen the ill effects of the water service interruption.

“No water for the entire Mactan Island or Lapu-lapu City on Sunday for eight hours is a disaster.  It is no longer an issue about inconvenience but… DISASTER,” he said in a Facebook post on Friday night, September 20.

MCWD has announced an eight-hour water service interruption from 8 a.m. to 4 p.m. on Sunday, September 22, that will result from the non-operation of their water wells in Barangay Casili in Consolacion town as a result of a scheduled power interruption to be implemented by Visayan Electric, formerly known as Veco (Visayan Electric Company).

As a result, parts of Liloan and Consolacion towns and the cities of Mandaue, Lapu-Lapu and Cebu are set to experience low to no water pressure.

“Please don’t let the people of Mactan Island (Lapu-Lapu City and Cordova residents) suffer with no water for eight hours. It is a already a disaster,” Bañacia.

Bañacia said that there is even a bigger risk if fire happens while there is no available water supply.

Because the water service interruption will be implemented because of a power issue, Bañacia also called on Visayan Electric to implement their business continuity plan (BCP) and for MCWD to devise and implement a contingency plan.

“We know there are ways to mitigate the impact of no water. It is unacceptable. More than a million Cebuanos will be affected with this interruption,” Bañacia said. / celr