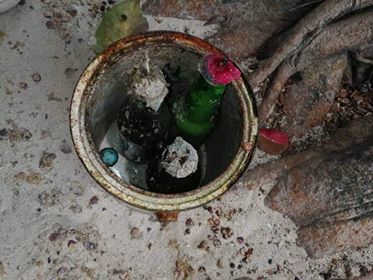 Three improvised explosives are recovered in the waters off Maribago Bluewater Resort on Mactan Island by volunteer scuba divers during the coastal and ocean clean-up drive initiated by the resort on Sept. 21, 2019. |Photo courtesy of Erik Monsanto

Erik Monsanto, the resort’s marketing and communication manager, said Maribago Bluewater Resort led the activity in line with celebration of the International Coastal Clean-up Day, which advocates for love and protection of the ocean.

During the clean-up that started at around 9 a.m., Monsanto said a group of divers found the improvised explosives, which are often used for dynamite fishing, with the blasting caps still intact, in the waters off the resort.

The explosives were found some 20 feet from the surface, he said.

Monsanto said this was not the first time that they found the same type of explosive during an ocean and coastal clean-up drive in the waters fronting the resort./elb