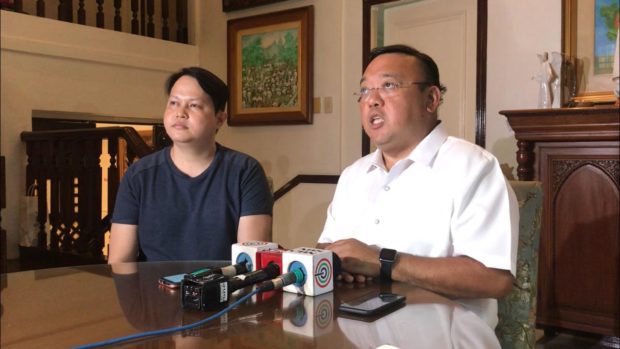 Former presidential spokesman Harry Roque (right) calls for the suspension of the Universal Health Care Law’s implementation as PhilHealth has been allegedly paying “ghost” dialysis treatments. With him during the press conference in Quezon City on June 6, 2019, is Edwin Roberto (left), who exposed the alleged controversial practice. Photo by Cathrine Gonzales / INQUIRER.net

MANILA, Philippines–Two whistleblowers in the PhilHealth “ghost claims” scam were arrested by the Quezon City Police after losing the benefit of the government’s Witness Protection Program (WPP).

Atty. Harry Roque said Edwin Roberto and Leizel de Leon, former employees of WellMed Dialysis Center lost the benefit of the WPP after the Regional Trial Court dismissed the case against the dialysis center’s officials for lack of jurisdiction.

The case was then refiled to the Metropolitan Trial Court (MeTC)

Roque said the court has set the bail for Roberto and De Leon at P610,000 each.

“No WPP for MeTc (Metropolitan Trial Court),” Roque said adding that a hearing was set to discharge them as state witnesses.

“It’s really travesty of justice intended to silence them. We will not allow that,” said Roque.

The testimony of the two led to the discovery of anomalies at the Philippine Health Insurance Company (PhilHealth). The National Bureau of Investigation (NBI) conducted its probe and filed a case before the DOJ.