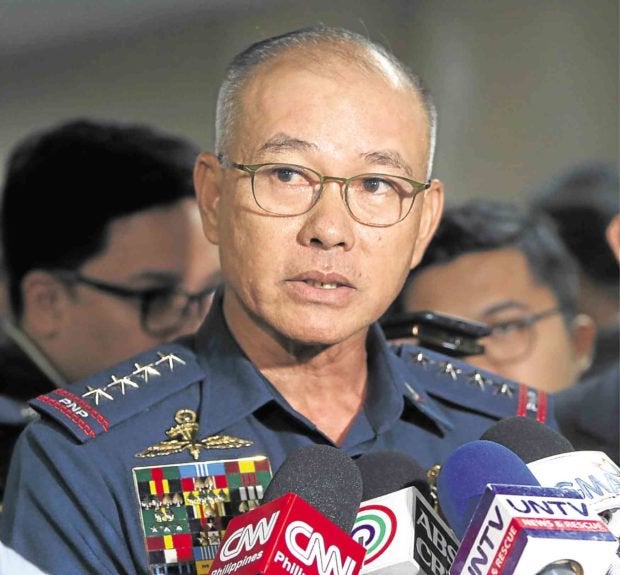 His early exit from his post will not stop the filing of any case against Philippine National Police chief Gen. Oscar Albayalde if evidence warrants it, said Sen. Richard Gordon, who has presided over the Senate hearings on the so-called ninja cops that put the top PNP official in the hot seat.

“Retirement will not exculpate you,” Gordon said, addressing Albayalde,  in a radio interview on Saturday.

“Retirement is your own personal decision,” the senator said, adding that criminal and administrative charges may be filed against the police chief over his involvement in a controversial drug raid in Pampanga where he was the provincial police director in 2013.

“At this point, [Albayalde] should be prepared to have cases filed against him [but] not necessarily from us because we cannot file the case,” the senator added.

He said “clear proof” that there was a cover-up of the dubious activities of the Pampanga policemen then under Albayalde came out during recent Senate hearings on ninja cops, or officers who pilfer or recycle drugs seized in police operations.

Albayalde could not be reached for comment regarding Gordon’s statements.

Several officials including former Criminal Investigation and Detection Group chief and now Baguio Mayor Benjamin Magalong told the Senate that the PNP chief — in a call made to Philippine Drug Enforcement Agency chief Aaron Aquino — had tried to intercede for the dismissal of the charges filed against his men who conducted the 2013 drug raid.

Another official, retired police general Rudy Lacadin, testified that the PNP chief had also called him regarding his investigation into the 2013 raid, and had told him that he (Albayalde)  “got just a little” from that operation.

Also on Saturday, Communications Secretary Martin Andanar clarified that Albayalde’s Oct. 29 exit from his post was not an early retirement “but a proposal for early turnover” of command.

The police chief’s official retirement would still be on Nov. 8 when he turns 56, the mandatory retirement age for police officers, Andanar said.

But Albayalde will be turning over the command of the force earlier, the Palace official said, because President Duterte is set to leave for Bangkok to attend the Association of Southeast Asian Nations (Asean) summit.

On Friday, Albayalde said he had started coordinating with veteran lawyer Estelito Mendoza on his plans to file charges against former police officials who had linked him to the irregularities surrounding the Pampanga drug raid.

Albayalde said Mendoza, who also hails from Pampanga, had offered to give him legal assistance, although they have yet to specify the charges to be filed pending further study by their legal team.

In August 2015, Mendoza also convinced the Supreme Court to grant bail to former Sen. Juan Ponce Enrile who was linked to the P10-billion pork barrel scam.

Albayalde refused to name the respondents in the complaint he would file, saying the public already know who have been throwing “false accusations” against him that are “unfounded” and “not supported by evidence.”

The public should have noticed by now who are sitting beside each other during the Senate hearings, he said.

“These people have to be made responsible for their actions. They should know better than make false accusations and fabricate lies against people,” he said.

He is “sure that the truth will come out,” Albayalde said.

“Definitely, somebody here is lying, and definitely it’s not me,” he said, paraphrasing Magalong’s statement accusing him of lying during last Wednesday’s hearing at the Senate.

On with the probe

ACT-CIS Rep. Eric Go-Yap expressed concern that the issues hounding Albayalde would die with his exit from the PNP.

The PNP chief’s early retirement itself has raised questions on how he arrived at that decision, Yap said. “Did he lose the trust of the President?  Or did he choose to vacate his post in his desire to shut off these issues  hurled against him?”

“Whatever the reason, we are asking the PNP to push through its investigation on ninja cops to put closure on issues that have marred the implementation of the law on good conduct time allowance,” he said. —With a report from Cathrine Gonzales and Melvin Gascon

Your subscription could not be saved. Please try again.
Your subscription has been successful.
Read Next
Global Cebuana entrepreneur to receive Most Influential Filipina Woman in the World award