Año explains as Duterte says Espenido ‘free to kill everybody’

“We all know our President, he likes to exaggerate to emphasize a point. But it’s not literal [because] we cannot kill everyone who is involved in drugs. We still observe the rule of law,” Año said in a radio interview.

In a speech at a business conference on Thursday, Mr. Duterte told Espenido: “Go there, you are free to kill everybody,” referring to Bacolod, which he described as “badly hit” by the drug problem.

“Son of a bitch, start killing them. The two of us can go to jail,” he added in his speech before diplomats and business executives. 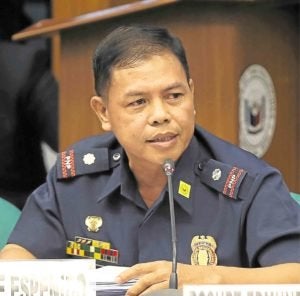 Mr. Duterte’s order to Espenido, whom he described as a “feared police official,” came more than a week after presidential spokesperson Salvador Panelo cited the controversial official’s new job as the “solution” to the illegal drugs problem in Bacolod.

In 2016, Espenido was the police chief in Albuera, Leyte, when its mayor, Rolando Espinosa Sr.—detained on an illegal drugs case—was killed in his cell by policemen said to be serving a search warrant.

Espenido was transferred to Ozamiz City in 2017. His term was marked by a series of predawn raids that resulted in the killing of Mayor Reynaldo Parojinog and 14 others linked to the narcotics trade.

Before his Bacolod assignment, the police official was assigned to Virac, Catanduanes, Calbayog City and Iloilo City. The last posting was withdrawn, however, because his rank was lower than what the position requires.

Año on Friday clarified that Mr. Duterte might have cited a “shortcut.” The Philippine National Police still follows the rule of law in its antidrug operations, he said.

“We use reasonable force, and if a suspect resists and [the officer’s] life is in danger, that’s the only recourse. What [the President] mentioned was just the shortcut,” the official said.

Although Mr. Duterte might not mean what he said, Gordon said he did not agree with the President’s order. “I don’t think he can say that. I do not like it. I do not approve of it.”

Addressing Mr. Duterte, Gordon said: “I’m not trying to look good here. Be careful because you might fall on your own sword. And I will be doing my duty to a friend when I said that.”

According to Año, Bacolod, along with Cebu and Iloilo, has been listed among the government’s “priority areas” in its antidrug campaign because of the high number of barangays affected.

“The number of affected barangays would be an indication that big drug syndicates are in operation, usually run by prominent personalities, politicians and even those from within the PNP organization,” he said.

The interior secretary said Espenido was chosen for the Bacolod assignment because of his “experience” and “strong will.” —WITH A REPORT FROM JULIE M. AURELIO AND MARLON RAMOS

Read Next
Water and trees